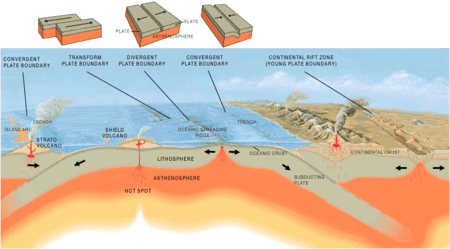 Volcanism (or vulcan activity) is the eruption of magma onto the surface of the Earth.

Magma under the crust is under very great pressure. When folding and faulting occur, cracks or fractures appear. These are lines of weakness.

Volcanoes are places where magma reaches the earth's surface. The type of volcano depends on the location of the eruption and the consistency of the magma. 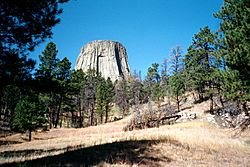 The main feature of the Devils Tower National Monument was created via intrusion.
Main page: Intrusion

Intrusive volcanism is when magma is forced into the rocks that make up the Earth's crust. When it cools and become solid while still underground, different features called plutons are formed. The rock formed is intrusive igneous rock.

These plutons will be exposed at the surface of land when the overlying rocks are removed after a long time of denudation (laid bare by erosion).

The molten magma under great pressure forces its way through the fissure of underground rocks and reaches the Earth's surface to form "igneous extrusion". Major extruded materials include gas, liquid and solid.

All content from Kiddle encyclopedia articles (including the article images and facts) can be freely used under Attribution-ShareAlike license, unless stated otherwise. Cite this article:
Volcanism Facts for Kids. Kiddle Encyclopedia.