A geyser is a hot spring which shoots out water and steam. They erupt when pressure has built up, often at regular intervals. There are about a thousand geysers around the world. About half are in Yellowstone National Park, Wyoming, United States. 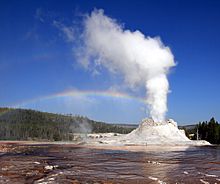 Geysers are made in special geological conditions. Only a few places on Earth have these conditions. Because of this, geysers are not very common. One place is the Yellowstone National Park, which is the remains of a gigantic volcano. Another is Iceland, which sits on top of the Mid-Atlantic Ridge, where new Earth's crust is formed.

Geysers are often near active volcanos. This is because the geyser is caused by magma. Surface water usually goes down to about 2,000 metres (6,600 ft). There, it mixes with hot rocks. The pressurized water begins to boil. When it is pressured enough, hot water and steam burst out of the geyser.

Great heat
A geyser needs a lot of heat. This heat comes from magma. This magma needs to be near the surface of the earth. Geysers need much more heat than is usually found near the earth's surface. This is why they are often around volcanoes or volcanic areas.

Water
The water that bursts from a geyser must travel underground through deep, high-pressure cracks in the earth's crust. 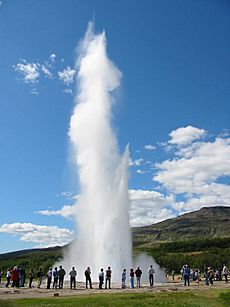 The geyser Strokkur in Iceland – a tourist spot.

Most importantly, the temperatures near the bottom of the geyser become high enough to start boiling the water. Steam bubbles come out of the top of the column. They burst through the geyser's vent. Some water flows or splashes out. This makes the weight of the column of water and the pressure on the water below less. When this pressure is released, the hot water turns into steam. It boils violently.

Geysers are used for various activities such as electricity generation, heating and tourism. Many geothermal reserves are found all around the world. The geyser fields in Iceland are some of the most commercially viable geyser locations in the world. Since the 1920s hot water directed from the geysers has been used to heat greenhouses and to grow food that otherwise could not have been cultivated in Iceland's inhospitable climate. Steam and hot water from the geysers has also been used for heating homes since 1943 in Iceland. 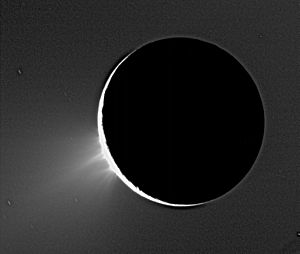 Jets thought to be geysers erupting from Enceladus' subsurface

There are several bodies in the Solar System where jet-like eruptions, often called "geysers" and "cryogeysers", have been seen. Unlike geysers on Earth, these are eruptions of gas, together with dust or ice particles, but without liquid.

All content from Kiddle encyclopedia articles (including the article images and facts) can be freely used under Attribution-ShareAlike license, unless stated otherwise. Cite this article:
Geyser Facts for Kids. Kiddle Encyclopedia.