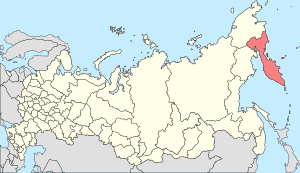 Kamchatka Peninsula in the far east of Russia. The pink area is the Kamchatka Krai which includes some of the mainland to the north.

The Kamchatka Peninsula (Russian: полуо́стров Камча́тка, poluostrov Kamchatka) is a peninsula in eastern Russia. It is 1,250 kilometres (780 mi) long. It covers about 270,000 km2 (100,000 sq mi). It is between the Pacific Ocean and the Sea of Okhotsk.

Kamchatka has the Volcanoes of Kamchatka, a UNESCO World Heritage Site.

All content from Kiddle encyclopedia articles (including the article images and facts) can be freely used under Attribution-ShareAlike license, unless stated otherwise. Cite this article:
Kamchatka Peninsula Facts for Kids. Kiddle Encyclopedia.