Local Koryak people lived in the region for a long time before European explorers first arrived. They were described to be war-like. In the 17th century, Russian explorers first arrived in the area. But the area's harsh climate, land and unfriendly natives made exploration difficult. Multiple fighting later broke out between the natives and the Russians throughout the 18th century. This was because the Tsar ordered more Russian explorations of the area. In 1768-1769, the smallpox disease nearly wiped out the population. The natives were finally brought under control because of the disease. In 1854, the area saw fighting between the Russians and the British and French during the Crimean War. In 1867, after the sale of Alaska to the United States, Kamchatka loss its importance. It was because travelers were no longer stopping over the area to go to Alaska. During the last months of World War II, the area became an important point for Soviet troops to invade Japan. After the war the area became a military zone. This zone was closed off to Soviet citizens till 1990 and foreigners till 1991. Today it remains as a Krai (federal subject) within Russia. 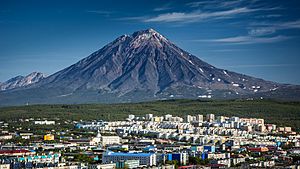 Kamchatka is found in the far eastern part of Siberia. Because of this, it has a subarctic climate, which have long, cold winters, and short, mild summers. Rainfall in the area is unusually higher than the rest of Eastern Siberia. This is because westerly winds blow in from the Sea of Japan. The landscape is mostly mountainous, with the Sredinny Mountain Range occupying a large part of the region. The Sredinny Range has the most amount of glacier in North-East Asia. The area also has a high density of mountains that are active volcanoes. These volcanoes are included as a UNESCO World Heritage Site. The area is prone to volcano eruption and earthquake. This is because it lies around the Pacific Ring of Fire. There are plenty of animals, birds and plants in the area. It is because of the good climate, geography and low human population.

Kamchatka's population at the end of the Soviet Union decreased for some time, according to data. It is currently increasing again. Most of the population live in cities and towns, like the capital, Petropavlovsk-Kamchatsky. Ethnic Koryaks and other natives compose of a very small percentage of the population. Russians compose a great majority of the population. Most people in Kamchatka practice Orthodox Christianity, while a sizable population are irreligious. Shamanism, which is a belief that worships spirits and nature, is still practiced by some natives in the area. Russian is taught and used commonly in Kamchatka. While native languages like Koryak, Itelmen or Chuvan are hardly taught or used at home.

The economy of Kamchatka is mostly based on fishing and processing of natural resources. These resources include wood, coal and gold, involving the lumber and mining industries. Kamchatka lies along major shipping routes. It thus provide services such as ship building, repairing and the moving of goods among ships. In the past, Kamchatka was part of the region's fur trade. This fur trade was connected with places like China and Alaska.

Generally, Kamchatka is isolated from the rest of Russia. There are no railway and road linking it with the rest of Russia. Flying is the most convenient way of entering or leaving Kamchatka. There are several airports, like the Yelizovo Airport. Flights from these airports link Kamchatka to cities further away. However, there are no international flights into the area. Kamchatka also lies along major shipping routes. These shipping routes connect Kamchatka with Alaska and East Asia by sea.

All content from Kiddle encyclopedia articles (including the article images and facts) can be freely used under Attribution-ShareAlike license, unless stated otherwise. Cite this article:
Kamchatka Krai Facts for Kids. Kiddle Encyclopedia.