Legislature is a word that comes from the Latin language, meaning "those who write the laws." A legislature is therefore a group of people who vote for new laws, for example in a state or country.

Each person in the legislature is usually either elected or appointed. The constitution of that state or country usually tells how a legislature is supposed to work.

A country, district, city, or other small area may also have something like a legislature. These are often called councils, and they make smaller laws for their areas. 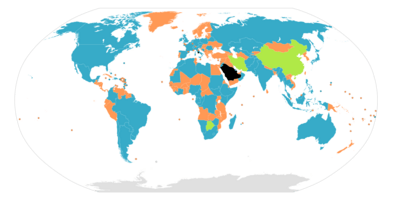 All content from Kiddle encyclopedia articles (including the article images and facts) can be freely used under Attribution-ShareAlike license, unless stated otherwise. Cite this article:
Legislature Facts for Kids. Kiddle Encyclopedia.