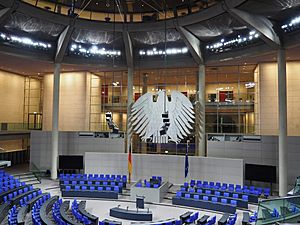 The plenary of the German Bundestag.

The Bundestag is the legislature of Germany. It meets in Berlin, in the Reichstag building, which was specially rebuilt ready for the Bundestag to move from Bonn.

The Bundestag has at least 598 members. Every 4 years the German people vote.

A party gets seats when it gets at least 5% of the votes. Every voter has two votes, one for a person and one for a party. 299 members each represent a constituency, just as in the British House of Commons or the US House of Representatives. The other half are elected from a party list in each Land. The total number of seats a party gets depends on the number of the second "party votes" it gets.

The Bundestag president is named Norbert Lammert. He oversees the sessions of the body.

All content from Kiddle encyclopedia articles (including the article images and facts) can be freely used under Attribution-ShareAlike license, unless stated otherwise. Cite this article:
Bundestag Facts for Kids. Kiddle Encyclopedia.