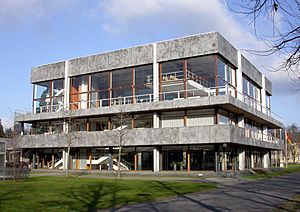 The Bundesverfassungsgericht is the Federal Constitutional Court of Germany. It does not hear ordinary criminal cases. Instead it deals with matters that affect the Constitution of Germany.

The Court is in Karlsruhe. This was to show it was separate from the federal government, first based in Bonn, and other federal bodies such as the German intelligence (BND) based in Munich.

There are different reasons the court may find something unconstitutional:

Decisions of the court on material conflicts are applied through a federal law by the Federal Constitutional Court Act (BVerfGG).

The court only hear certain cases:

Anyone can complain to the court that their constitutional rights were violated. They have been some of the most important decisions the court has made. Some important laws have been overturned, especially about taxes.

Federal bodies, including members of the Bundestag, may bring disputes over powers and procedures before the court.

The Länder can ask the court to decide if they or the federal government have the right to do something, or if something is being done in the right way.

The Bundestag's Committees of investigation, individual members of the Bundestag, or the federal government can ask the court to decide on the committee's powers and procedures.

Any government body or involved voter can ask the court to investigate if a federal election was properly run.

If the Bundestag, the Bundesrat or the federal government think that the President or a judge or member of one of the Federal Supreme Courts has broken the constitution or a federal law, the Bundesverfassungsgericht decides if they should be removed from office.

Only the Constitutional Court has the power to ban a political party. This has only happened twice, both times in the 1950s: the Sozialistische Reichspartei (SRP), was a neo-nazi party. It was banned in 1952. The Communist Party of Germany (KPD) was banned in 1956. In 2003 the third case to ban a party failed. The court found out that many of the officials of the extreme right-wing National Democratic Party (NPD) were actually controlled by the German secret services. The court decided not to carry on hearing the case.

The court has 16 judges. They are divided into two groups, called senates, of eight judges. The chairman of one senate is also the President of the Court ("Chief Justice"). The chairman of the other senate is the vice president. Most cases are heard by a "chamber" which is three members of one senate. All three judges of the chamber must agree on a decision. A chamber has to use precedent (past rulings). If a chamber thinks a precedent should be changed they have to let the case be decided by the Senate as a whole. Similarly, if a Senate thinks a precedent set by the other Senate should be changed precedent of the must ask the "Plenum" (a meeting of all 16 judges).

Decisions by a Senate need an absolute majority of 5 votes (in some cases a two-thirds majority is required, that is, 6 out of 8 votes). The BVerfGG decides which type of cases a senate hears.

The judges have a 12-year term, but they must retire when reaching the age of 68. A judge must be at least 40 years old and must be a well-trained jurist. Three out of eight members of each Senate must have been a judge of a Federal Supreme Court. Of the other five members of each Senate, most judges have been a professor of law at a university, a public servant or a lawyer.

At the end of their term, most judges retire from public life. One notable exception was Roman Herzog, who was elected Federal President in 1994, shortly before the end of his term as President of the Court.

All content from Kiddle encyclopedia articles (including the article images and facts) can be freely used under Attribution-ShareAlike license, unless stated otherwise. Cite this article:
Bundesverfassungsgericht Facts for Kids. Kiddle Encyclopedia.