The Bundesrat is part of the parliament of Germany.

The cabinets of the 16 states of Germany appoint the delegations that represent them in the Bundesrat. They can remove them at any time. Normally, a state delegation is headed by the head of government. The delegation is made up of members of the state government.

Thirteen of the states of Germany (in German: Bundesländer) have a Minister-Präsident (Prime Minister), the other 3 are city-states which have a Mayor. These prime ministers or mayors each act as chairman of the Bundesrat for one year at a time.

Germany does not have a vice president. Instead if the Bundespräsident (Federal President) cannot do his job the President of the Bundesrat can act in his place if necessary.

Although it is a part of the German Parliament, the Bundesrat does not meet in the same building as the Bundestag. Instead new offices and a modern meeting chamber were built inside the old Prussian House of Lords building. 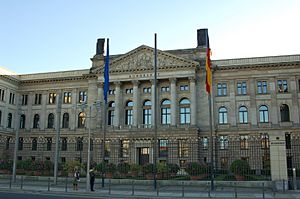 There are 69 members of the Bundesrat. How many delegates a land (state) has depends on its population. The smallest state, Bremen, has three members. North Rhine-Westphalia is the most populous (has the most people) land. It sends six members to the Bundesrat.

The Bundestag decides most things by absolute majority (at least half of the number of members). That is 35 votes. Some important decisions need two-thirds of all of the possible votes. That is 46 votes.

Each land votes as a block. This means that Berlin, for example, can only cast four yes votes or four no votes. Its delegates cannot choose to vote in different ways. If a land decided to send only one person to the Bundesrat, that person would still have all of the land's votes. Usually the Minister President casts all of his land's votes, even if the other members are there.

If a land has a coalition government (that is, a government of two or more political parties) then all parties must agree how to vote in the Bundesrat. In 2002 Brandenburg did not agree how to vote about the Immigration bill. The Federal Constitutional Court said that the bill was not law because Brandenburg's vote could not be included in the total. This meant that the bill did not get a majority in the Bundesrat.

All content from Kiddle encyclopedia articles (including the article images and facts) can be freely used under Attribution-ShareAlike license, unless stated otherwise. Cite this article:
Bundesrat (Germany) Facts for Kids. Kiddle Encyclopedia.