North Rhine-Westphalia (German: Nordrhein-Westfalen) is the federal state (Bundesland) with the highest population in Germany. It is in the western part of Germany and has 18,033,000 inhabitants. The capital is Düsseldorf.

The first written account of the area was by its conqueror, Julius Caesar, the territories west of the Rhine were occupied by the Eburones and east of the Rhine he reported the Ubii (across from Cologne) and the Sugambri to their north. The Ubii and some other Germanic tribes such as the Cugerni were later settled on the west side of the Rhine in the Roman province of Germania Inferior. Julius Caesar conquered the tribes on the left bank, and Augustus established numerous fortified posts on the Rhine, but the Romans never succeeded in gaining a firm footing on the right bank, where the Sugambri neighboured several other tribes including the Tencteri and Usipetes. North of the Sigambri and the Rhine region were the Bructeri.

As the power of the Roman empire declined, many of these tribes came to be seen collectively as Ripuarian Franks and they pushed forward along both banks of the Rhine, and by the end of the fifth century had conquered all the lands that had formerly been under Roman influence. By the eighth century, the Frankish dominion was firmly established in western Germany and northern Gaul, but at the same time, to the north, Westphalia was being taken over by Saxons pushing south.

The Merovingian and Carolingian Franks eventually built an empire which controlled first their Ripuarian kin, and then the Saxons. On the division of the Carolingian Empire at the Treaty of Verdun, the part of the province to the east of the river fell to East Francia, while that to the west remained with the kingdom of Lotharingia.

By the time of Otto I (d. 973), both banks of the Rhine had become part of the Holy Roman Empire, and the Rhenish territory was divided between the duchies of Upper Lorraine on the Moselle and Lower Lorraine on the Meuse. The Ottonian dynasty had both Saxon and Frankish ancestry. 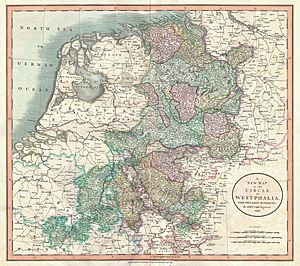 As the central power of the Holy Roman Emperor weakened, the Rhineland split into numerous small, independent, separate vicissitudes and special chronicles. The old Lotharingian divisions became obsolete, although the name survives for example in Lorraine in France, and throughout the Middle Ages and even into modern times, the nobility of these areas often sought to preserve the idea of a preeminent duke within Lotharingia, something claimed by the Dukes of Limburg, and the Dukes of Brabant. Such struggles as the War of the Limburg Succession therefore continued to create military and political links between what is now Rhineland-Westphalia and neighbouring Belgium and the Netherlands.

In spite of its dismembered condition and the sufferings it underwent at the hands of its French neighbours in various periods of warfare, the Rhenish territory prospered greatly and stood in the foremost rank of German culture and progress. Aachen was the place of coronation of the German emperors, and the ecclesiastical principalities of the Rhine bulked largely in German history.

Prussia first set foot on the Rhine in 1609 by the occupation of the Duchy of Cleves and about a century later Upper Guelders and Moers also became Prussian. At the peace of Basel in 1795, the whole of the left bank of the Rhine was resigned to France, and in 1806, the Rhenish princes all joined the Confederation of the Rhine.

After the Congress of Vienna, Prussia was awarded the entire Rhineland, which included the Grand Duchy of Berg, the ecclesiastic electorates of Trier and Cologne, the free cities of Aachen and Cologne, and nearly a hundred small lordships and abbeys. The Prussian Rhine province was formed in 1822 and Prussia had the tact to leave them in undisturbed possession of the liberal institutions to which they had become accustomed under the republican rule of the French. In 1920, the districts of Eupen and Malmedy were transferred to Belgium (see German-speaking Community of Belgium).

Around AD 1, numerous incursions occurred through Westphalia and perhaps even some permanent Roman or Romanized settlements. The Battle of Teutoburg Forest took place near Osnabrück (as mentioned, whether this is in Westphalia is disputed) and some of the Germanic tribes who fought at this battle came from the area of Westphalia. Charlemagne is thought to have spent considerable time in Paderborn and nearby parts. His Saxon Wars also partly took place in what is thought of as Westphalia today. Popular legends link his adversary Widukind to places near Detmold, Bielefeld, Lemgo, Osnabrück, and other places in Westphalia. Widukind was buried in Enger, which is also a subject of a legend.

Along with Eastphalia and Engern, Westphalia (Westfalahi) was originally a district of the Duchy of Saxony. In 1180, Westphalia was elevated to the rank of a duchy by Emperor Barbarossa. The Duchy of Westphalia comprised only a small area south of the Lippe River. 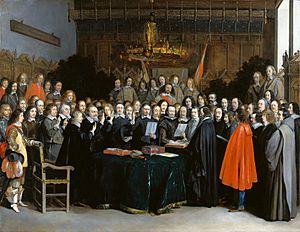 Parts of Westphalia came under Brandenburg-Prussian control during the 17th and 18th centuries, but most of it remained divided duchies and other feudal areas of power. The Peace of Westphalia of 1648, signed in Münster and Osnabrück, ended the Thirty Years' War. The concept of nation-state sovereignty resulting from the treaty became known as "Westphalian sovereignty".

As a result of the Protestant Reformation, there is no dominant religion in Westphalia. Roman Catholicism and Lutheranism are on relatively equal footing. Lutheranism is strong in the eastern and northern parts with numerous free churches. Münster and especially Paderborn are thought of as Catholic. Osnabrück is divided almost equally between Catholicism and Protestantism.

After the defeat of the Prussian Army at the Battle of Jena-Auerstedt, the Treaty of Tilsit in 1807 made the Westphalian territories part of the Kingdom of Westphalia from 1807 to 1813. It was founded by Napoleon and was a French vassal state. This state only shared the name with the historical region; it contained only a relatively small part of Westphalia, consisting instead mostly of Hessian and Eastphalian regions.

After the Congress of Vienna, the Kingdom of Prussia received a large amount of territory in the Westphalian region and created the province of Westphalia in 1815. The northernmost portions of the former kingdom, including the town of Osnabrück, had become part of the states of Hanover and Oldenburg.

Creation of the state 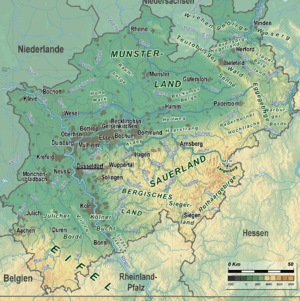 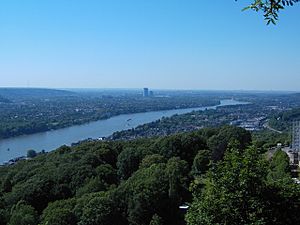 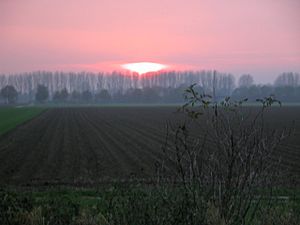 Sunset near the Lower Rhine 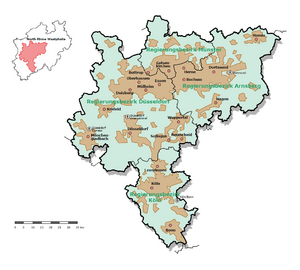 North Rhine-Westphalia encompasses the plains of the Lower Rhine region and parts of the Central Uplands (die Mittelgebirge) up to the gorge of Porta Westfalica. The state covers an area of 34,083 km2 (13,160 sq mi) and shares borders with Belgium (Wallonia) in the southwest and the Netherlands (Limburg, Gelderland and Overijssel) in the west and northwest. It has borders with the German states of Lower Saxony to the north and northeast, Rhineland-Palatinate to the south and Hesse to the southeast.

Approximately half of the state is located in the relative low-lying terrain of the Westphalian Lowland and the Rhineland, both extending broadly into the North German Plain. A few isolated hill ranges are located within these lowlands, among them the Hohe Mark, the Beckum Hills, the Baumberge and the Stemmer Berge.
The terrain rises towards the south and in the east of the state into parts of Germany's Central Uplands. These hill ranges are the Weser Uplands – including the Egge Hills, the Wiehen Hills, the Wesergebirge and the Teutoburg Forest in the east, the Sauerland, the Bergisches Land, the Siegerland and the Siebengebirge in the south, as well as the left-Rhenish Eifel in the southwest of the state. The Rothaargebirge in the border region with Hesse rises to height of about 800 m above sea level. The highest of these mountains are the Langenberg, at 843.2 m above sea level, the Kahler Asten (840.7 m) and the Clemensberg (839.2 m).

The planimetrically-determined centre of North Rhine-Westphalia is located in the south of Dortmund-Aplerbeck in the Aplerbecker Mark (51° 28' N, 7° 33' Ö). Its westernmost point is situated near Selfkant close to the Dutch border, the easternmost near Höxter on the Weser. The southernmost point lies near Hellenthal in the Eifel region. The northernmost point is the NRW-Nordpunkt near Rahden in the northeast of the state. The Nordpunkt has located the only 100  km to the south of the North Sea coast. The deepest natural dip is arranged in the district Zyfflich in the city of Kranenburg with 9.2 m above sea level in the northwest of the state. Though, the deepest point overground results from mining. The open-pit Hambach reaches at Niederzier a deep of 293 m below sea level. At the same time, this is the deepest man-made dip in Germany.

The Pader, which flows entirely within the city of Paderborn, is considered Germany's shortest river.

For many, North Rhine-Westphalia is synonymous with industrial areas and urban agglomerations. However, the largest part of the state is used for agriculture (almost 52%) and forests (25%).

The flag of North Rhine-Westphalia is green-white-red with the combined coats of arms of the Rhineland (white line before green background, symbolizing the river Rhine), Westfalen (the white horse) and Lippe (the red rose).

According to legend, the horse in the Westphalian coat of arms is the horse that the Saxon leader Widukind rode after his baptism. Other theories attribute the horse to Henry the Lion. Some connect it with the Germanic rulers Hengist and Horsa.

The state is not known for its castles like other regions in Germany. However, North Rhine-Westphalia has a high concentration of museums, cultural centres, concert halls and theatres.[improper synthesis?]

The state has Aachen Cathedral, the Cologne Cathedral, the Zeche Zollverein in Essen, the Augustusburg Palace in Brühl and the Imperial Abbey of Corvey in Höxter which are all World Heritage Sites.

All content from Kiddle encyclopedia articles (including the article images and facts) can be freely used under Attribution-ShareAlike license, unless stated otherwise. Cite this article:
North Rhine-Westphalia Facts for Kids. Kiddle Encyclopedia.