Siegen is a city in Germany, in the south Westphalian part of North Rhine-Westphalia.

It is located in the district of Siegen-Wittgenstein in the Arnsberg region. The university town (nearly 20000 students in the 2018–2019 winter semester) is the district seat, and is ranked as a "higher centre" in the South Westphalian urban agglomeration.

In 1975, municipal reforms and amalgamations lifted Siegen's population above the 100,000 mark.

The city of Siegen lies in the basin of the upper reaches of the river Sieg. From there, lateral valleys branch off in many directions. The heights of the surrounding mountains, wherever they are not actually settled, are covered in coppice. To the north lies the Sauerland, to the northwest the Rothaargebirge and to the southwest the Westerwald.

The city lies on the German-Dutch holiday road called the Orange Route, joining towns, cities and regions associated with the House of Orange. 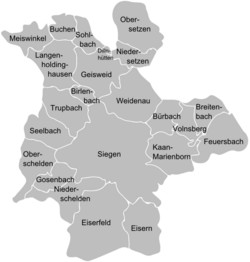 Divisions within the city.

The city's total land area is roughly 115 km2 (44 sq mi). Its greatest east-west span is about 12 km (7 mi), and its greatest north-south span is about 12 km (7 mi). City limits are 48 km (30 mi) long. Siegen lies at a median elevation of 290 m (951 ft) above sea level. The city's greatest elevation is the peak of the Pfannenberg at 499 m (1,637 ft) above sea level at southern city limits. Siegen's lowest point is 215 m (705 ft) above sea level at Niederschelden at southwestern city limits, which there also forms the state boundary with Rhineland-Palatinate. Roughly 60% of the city's land is wooded, making Siegen one of Germany's greenest cities.

The city area is divided into six zones, called Bezirke in German and comparable to boroughs in some cities, which themselves are further divided into various communities (Ortsteile and Stadtteile). Each "borough" has a borough board consisting of 15 voting and 15 non-voting members who are appointed by city council with regard to each party's share of the vote in the municipal elections in the borough in question. The borough boards decide on matters particular to their respective boroughs. These matters are laid down in Siegen's city charter.

A view over Siegen with the university in the background.

Siegen's six boroughs and communities belonging to each

Along with the boroughs and communities into which the city is divided, as mandated by law, there are also further subdivisions within the communities, each with its own name, but none with distinctly clear borders. They are called Quartiere, which can be rendered as "quarters" or "neighbourhoods". Examples of these include the Unterstadt, the Oberstadt, Hammerhütte, Lindenberg, Charlottental, Haardter Berg (with the university) and the Alte Dreisbach. Some neighbourhoods even straddle community boundaries, like Sieghütte, parts of which can be found in both Siegen-Mitte and Weidenau. Moreover, some neighbourhoods even overlap each other. Unlike the boroughs (Bezirke) or communities (Ortsteile and Stadtteile), the Quartiere have no statistical or administrative importance. They do, however, serve some function as to their inhabitants' identity, but more practically than that, they are also useful for finding one's way with a city map and using in bus route names and on public notices and traffic signs. Many of the Hüttentalstraße city Autobahn's exits are also named after the Quartiere that they serve.

It has been twinned with the borough of Spandau in Berlin since 1952. Other twin cities are:

All content from Kiddle encyclopedia articles (including the article images and facts) can be freely used under Attribution-ShareAlike license, unless stated otherwise. Cite this article:
Siegen Facts for Kids. Kiddle Encyclopedia.