Belgium, officially the Kingdom of Belgium, is a federal state in Western Europe. Belgium has an area of 30,528 square kilometres (11,787 sq mi). Around 11 million people live in Belgium. It is a founding member of the European Union and is home to its headquarters. The capital city of Belgium is Brussels, where the European Union, NATO and other famous organisations are based.

There are three regions in Belgium:

The population is about 60% Dutch-speaking, 39% French-speaking, and 1% German-speaking (the so-called Deutschbelgier). To look after all these groups, Belgium has a complicated system of government. 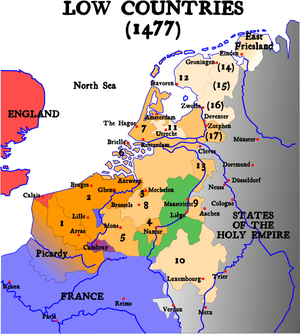 The Seventeen Provinces (orange, brown and yellow areas) and the Bishopric of Liège (green) 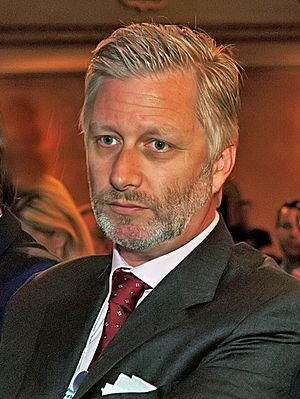 The name 'Belgium' comes from Gallia Belgica. This was a Roman province in the northernmost part of Gaul. Before Roman invasion in 100 BC, the Belgae, a mix of Celtic and Germanic peoples, lived there. The Germanic Frankish tribes during the 5th century brought the area under the rule of the Merovingian kings. A slow shift of power during the 8th century led the kingdom of the Franks to change into the Carolingian Empire. The Treaty of Verdun in 843 divided the region into Middle and West Francia. They were vassals either of the King of France or of the Holy Roman Emperor. Many of these fiefdoms were united in the Burgundian Netherlands of the 14th and 15th centuries.

After the campaigns of 1794 in the French Revolutionary Wars, the Low Countries were added into the French First Republic. This ended Austrian rule in the area. Adding back the Low Countries formed the United Kingdom of the Netherlands. This happened at the end of the First French Empire in 1815.

The Belgian Revolution was in 1830. Leopold I became king on July 21 1831. This is now celebrated as Belgium's National Day.

Episode of the Belgian Revolution of 1830 (1834), by Egide Charles Gustave Wappers, Museum of Ancient Art, Brussels

The Berlin Conference of 1885 gave control of the Congo Free State to King Leopold II. This was for him personally and not for the country of Belgium. Millions of Congolese people were hurt or killed, mostly to make rubber, and Leopold became very wealthy. In 1908 the Belgian state took control of the colony after there was a scandal about the deaths. It was then called the Belgian Congo, but the indigenous peoples continued to be killed and face violence from the colonial government.

Germany invaded Belgium in 1914. This was part of World War I. The opening months of the war were very bad in Belgium. During the war Belgium took over the of Ruanda-Urundi (modern-day Rwanda and Burundi). After the First World War, the Prussian districts of Eupen and Malmedy were added into Belgium in 1925. The country was again invaded by Germany in 1940 and under German control until 1944. After World War II, the people made king Leopold III leave his throne in 1951. This is because they thought he helped the Germans.

Since 1993, Belgium is a federal state, divided into three regions and three communities.

It has a system of government known as a constitutional monarchy, meaning that it has a monarch, but that the monarch does not rule the country, and that a government is elected democratically.

Belgium has had its own monarchy since 1831. King Albert II left the throne on July 21, 2013 and the current king is Philippe.

In Belgium, the government is elected. Between mid-2010 and late 2011, after no clear result in the election, Belgium had no official government, until Elio Di Rupo became Prime Minister. Flanders and Wallonia both also have their own regional governments, and there is a notable independence movement in Flanders. Charles Michel is currently the Prime Minister.

Belgium is next to France, Germany, Luxembourg and the Netherlands. Its total area is 33,990 square kilometers. The land area alone is 30,528 km². Belgium has three main geographical regions. The coastal plain is in the north-west. The central plateau are part of the Anglo-Belgian Basin. The Ardennes uplands are in the south-east. The Paris Basin reaches a small fourth area at Belgium's southernmost tip, Belgian Lorraine.

The coastal plain is mostly sand dunes and polders. Further inland is a smooth, slowly rising landscape. There are fertile valleys. The hills have many forests. The plateaus of the Ardennes are more rough and rocky. They have caves and small, narrow valleys. Signal de Botrange is the country's highest point at 694 metres (2,277 ft).

Belgium is divided into three Regions. Flanders and Wallonia are divided into provinces. The third Region, Brussels is not part of any province.

A proportional representation of Belgium exports, 2019

Belgium's strongly globalized economy and its transport infrastructure are integrated with the rest of Europe. 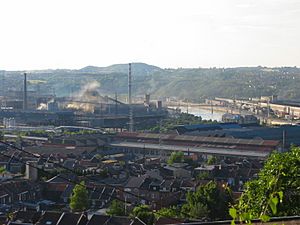 Steelmaking along the Meuse at Ougrée, near Liège

Belgium was the first continental European country to undergo the Industrial Revolution, in the early 19th century. Areas in Liège Province and around Charleroi rapidly developed mining and steelmaking, which flourished until the mid-20th century in the Sambre and Meuse valley and made Belgium one of the three most industrialized nations in the world from 1830 to 1910. However, by the 1840s the textile industry of Flanders was in severe crisis, and the region experienced famine from 1846 to 1850.

After World War II, Ghent and Antwerp experienced a rapid expansion of the chemical and petroleum industries. The 1973 and 1979 oil crises sent the economy into a recession; it was particularly prolonged in Wallonia, where the steel industry had become less competitive and experienced a serious decline. In the 1980s and 1990s, the economic center of the country continued to shift northwards and is now concentrated in the populous Flemish Diamond area.

Belgium switched to the euro in 2002, with the first sets of euro coins being minted in 1999. The standard Belgian euro coins designated for circulation show the portrait of the monarch (first King Albert II, since 2013 King Philippe).

There is a large economic gap between Flanders and Wallonia. Wallonia was historically wealthy compared to Flanders, mostly due to its heavy industries, but the decline of the steel industry post-World War II led to the region's rapid decline, whereas Flanders rose swiftly. Since then, Flanders has been prosperous, among the wealthiest regions in Europe, whereas Wallonia has been languishing. 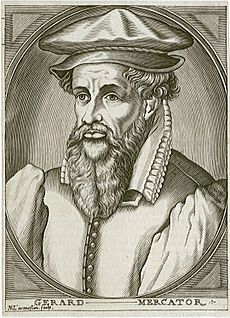 Adding to science and technology has happened throughout the country's history. cartographer Gerardus Mercator, anatomist Andreas Vesalius, herbalist Rembert Dodoens and mathematician Simon Stevin are among the most influential scientists.

Chemist Ernest Solvay and engineer Zenobe Gramme gave their names to the Solvay process and the Gramme dynamo in the 1860s. Bakelite was formed in 1907–1909 by Leo Baekeland. A major addition to science was also due to a Belgian, Georges Lemaître. He is the one who made the Big Bang theory of the start of the universe in 1927.

Three Nobel Prizes in Physiology or Medicine were awarded to Belgians: Jules Bordet in 1919, Corneille Heymans in 1938 and Albert Claude together with Christian De Duve in 1974. Ilya Prigogine was awarded the Nobel Prize in Chemistry in 1977. Two Belgian mathematicians have been awarded the Fields Medal: Pierre Deligne in 1978 and Jean Bourgain in 1994.

In February 2014, Belgium became the first country in the world to legalize euthanasia without any age limits.

Belgium has the highest rail network density within the European Union with 113.8 km/1 000 km2.

Belgium experiences some of the most congested traffic in Europe. In 2010, commuters to the cities of Brussels and Antwerp spent respectively 65 and 64 hours a year in traffic jams.

Like in most small European countries, more than 80% of the airways traffic is handled by a single airport, the Brussels Airport.

The ports of Antwerp and Zeebrugge (Bruges) share more than 80% of Belgian maritime traffic, Antwerp being the second European harbor with a gross weight of goods handled of 115 988 000 t in 2000 after a growth of 10.9% over the preceding five years. In 2016, the port of Antwerp handled 214 million tons after a year-on-year growth of 2.7%.

There have been many additions to painting and architecture. Several examples of major architectural places in Belgium belong to UNESCO's World Heritage List. In the 15th century the religious paintings of Jan van Eyck and Rogier van der Weyden were important. The 16th century had more styles such as Peter Breughel's landscape paintings and Lambert Lombard's showing of the antique. The style of Peter Paul Rubens and Anthony van Dyck was strong in the early 17th century in the Southern Netherlands.

During the 19th and 20th centuries many original romantic, expressionist and surrealist Belgian painters started. These include James Ensor and other artists in the Les XX group, Constant Permeke, Paul Delvaux and René Magritte. The sculptor Panamarenko is still a remarkable figure in contemporary art. The artist Jan Fabre and the painter Luc Tuymans are other internationally known figures in contemporary art.

Belgian contributions to architecture were also in the 19th and 20th centuries. Victor Horta and Henry van de Velde were major starters of the Art Nouveau style.

In the 19th and 20th centuries, there were major violinists, such as Henri Vieuxtemps, Eugène Ysaÿe and Arthur Grumiaux. Adolphe Sax invented the saxophone in 1846. The composer César Franck was born in Liège in 1822. Newer music in Belgium is also famous. Jazz musician Toots Thielemans and singer Jacques Brel have made global fame. In rock/pop music, Telex, Front 242, K's Choice, Hooverphonic, Zap Mama, Soulwax and dEUS are well known. In the heavy metal scene, bands like Machiavel, Channel Zero and Enthroned have a worldwide fan-base.

Belgium has several well-known authors, including the poet Emile Verhaeren and novelists Hendrik Conscience, Georges Simenon, Suzanne Lilar and Amélie Nothomb. The poet and playwright Maurice Maeterlinck won the Nobel Prize in literature in 1911. The Adventures of Tintin by Hergé is the best known of Franco-Belgian comics. Many other major authors, including Peyo, André Franquin, Edgar P. Jacobs and Willy Vandersteen brought the Belgian cartoon strip industry a worldwide fame. 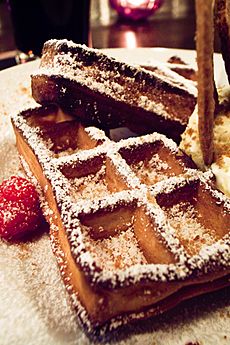 Brussels waffles, commonly known as Belgian waffles outside of Belgium

Belgium is famous for beer, chocolate, waffles and french fries. French fries were first made in Belgium. The national dishes are "steak and fries with salad", and "mussels with fries". Other local fast food dishes include a Mitraillette. Brands of Belgian chocolate and pralines, like Côte d'Or, Guylian, Neuhaus, Leonidas, Corné and Galler are famous. Belgium makes over 1100 varieties of beer. The Trappist beer of the Abbey of Westvleteren has repeatedly been rated the world's best beer. The biggest brewer in the world by volume is Anheuser-Busch InBev, based in Leuven. 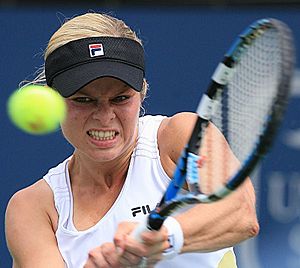 Since the 1970s, sports clubs are organised separately by each language community. Association football is one of the most popular sports in both parts of Belgium, together with cycling, tennis, swimming and judo. With five victories in the Tour de France and many other cycling records, Belgian Eddy Merckx is said to be one of the greatest cyclists of all time. Jean-Marie Pfaff, a former Belgian goalkeeper, is said to be one of the greatest in the history of football (soccer). Belgium and The Netherlands hosted the UEFA European Football Championship in 2000. Belgium hosted the 1972 European Football Championships.

Kim Clijsters and Justine Henin both were Player of the Year in the Women's Tennis Association. The Spa-Francorchamps motor-racing circuit hosts the Formula One World Championship Belgian Grand Prix. The Belgian driver, Jacky Ickx, won eight Grands Prix and six 24 Hours of Le Mans. Belgium also has a strong reputation in motocross. Sporting events held each year in Belgium include the Memorial Van Damme athletics competition, the Belgian Grand Prix Formula One, and a number of classic cycle races such as the Tour of Flanders and Liège–Bastogne–Liège. The 1920 Summer Olympics were held in Antwerp.

All content from Kiddle encyclopedia articles (including the article images and facts) can be freely used under Attribution-ShareAlike license, unless stated otherwise. Cite this article:
Belgium Facts for Kids. Kiddle Encyclopedia.