Philippe of Belgium facts for kids

Philippe or Filip (Dutch: Filip Leopold Lodewijk Maria [ˈfilɪp ˈleːjoːpɔlt ˈloːdəʋɛik maːˈrijaː]; French: Philippe Léopold Louis Marie [filip leɔpɔld lwi maʁi]; born 15 April 1960) is King of the Belgians. He is the eldest child of King Albert II and Queen Paola. He succeeded his father upon the latter's abdication for health reasons on 21 July 2013. He married Mathilde d'Udekem d'Acoz in 1999, with whom he has four children. Their eldest child, Princess Elisabeth, is first in the line of succession.

Philippe was born on 15 April 1960 at the Belvédère Castle in Laeken north of Brussels. His father, Prince Albert, Prince of Liège (later King Albert II), was the second son of King Leopold III of Belgium and a younger brother of Baudouin. His mother, Paola, Princess of Liège (later Queen Paola), is a daughter of the Italian aristocrat Fulco VIII, Prince Ruffo di Calabria, 6th Duke of Guardia Lombarda. His mother descends from the French House of La Fayette, and the king is a descendant of Gilbert du Motier, Marquis de Lafayette, and Marie Adrienne Françoise de Noailles.

Philippe was baptised one month later at the church of Saint Jacques-sur-Coudenberg in Brussels on 17 May, and named Philippe after his great-great-grandfather Prince Philippe, Count of Flanders. His godparents were his paternal grandfather, King Leopold III, and his maternal grandmother, Donna Luisa, Princess Ruffo di Calabria.

Albert and Paola's marriage was unhappy, and they were usually absent from Philippe's life. The child neglect was so severe that child psychologist Peter Adriaenssens [nl] described it as justifying intervention by social workers.

The King has a half-sibling, Princess Delphine of Belgium (born 1968).

As a child the future king was required to transfer from a French-language school, where he was purportedly happy, to a secondary school in Flanders, where he found it difficult to make friends. “In my youth, I had many problems at school” Philippe told a group of teenage dropouts in 2019. “I felt badly treated. It was not easy for me”.

From 1978 to 1981, Philippe was educated at the Belgian Royal Military Academy in the 118th "Promotion Toutes Armes" (Promotion All Weapons). On 26 September 1980, he was appointed second lieutenant and took the officer's oath.

Philippe continued his education at Trinity College, Oxford, and he attended graduate school at Stanford University, California, where he graduated in 1985 with an MA degree in political science. He obtained his fighter pilot's wings and his certificates as a parachutist and a commando. In 1989, he attended a series of special sessions at the Royal Higher Defence Institute. The same year, he was promoted to colonel. 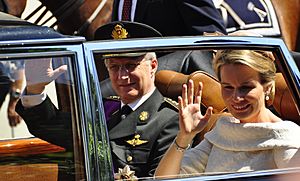 King Philippe and Queen Mathilde wave to crowds in Brussels after his swearing in as the new Belgian monarch.

Philippe married Mathilde d'Udekem d'Acoz, daughter of a Walloon count of a Belgian noble family and female line descendant of Polish noble families such as the princes Sapieha and counts Komorowski, on 4 December 1999 in Brussels, in a civil ceremony at the Brussels Town Hall and a religious ceremony at the Cathedral of Saint Michel and Saint Gudule in Brussels. They have four children:

In this capacity, Philippe has headed more than 60 economic missions. Upon his accession as seventh King of the Belgians, this role was taken over by his sister Princess Astrid. 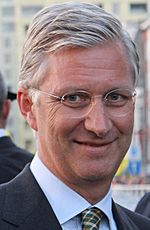 King Albert II announced on 3 July 2013 that he would abdicate in favour of Philippe on 21 July 2013. Approximately one hour after King Albert II's abdication, Prince Philippe was sworn in as King of the Belgians. His eldest child, Princess Elisabeth, became his heir apparent and is expected to become Belgium's first queen regnant.

Philippe played a role in forming a coalition government after the 2014 Belgian federal election. Political meetings with the King were moved from the Palace of Laeken to the Royal Palace of Brussels. In May 2019, Philippe met with Vlaams Belang President Tom Van Grieken, the first time the party had received a royal audience.

In 2020, Philippe announced regret for the "acts of violence and cruelty" committed in Belgian Congo. 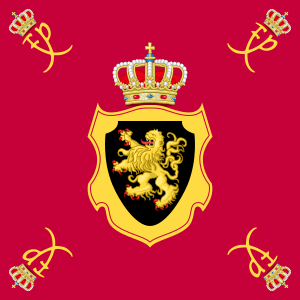 Personal Standard of Philippe, King of the Belgians

All content from Kiddle encyclopedia articles (including the article images and facts) can be freely used under Attribution-ShareAlike license, unless stated otherwise. Cite this article:
Philippe of Belgium Facts for Kids. Kiddle Encyclopedia.