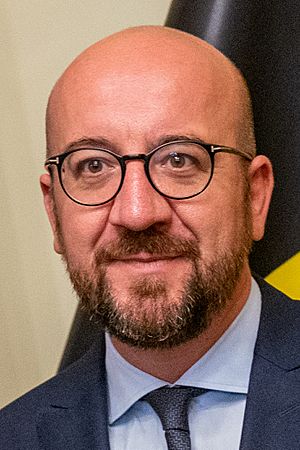 Charles Y.J.Gh. Michel (born December 21, 1975 in Namur) is a Belgian lawyer and politician of the Mouvement réformateur. From October 11, 2014 through October 27, 2019, he was the Prime Minister of Belgium.

Michel Jr. studied at the Université Libre de Bruxelles and the University of Amsterdam. He successively worked as a lawyer in Brussels.

He held several political posts like government minister of Development Cooperation and an alderman and mayor of Wavre (last one still incumbent).

On 2 July 2019, the President of the European Council Donald Tusk announced a deal reached by EU Leaders which would make Michel his replacement and took office on 1 December 2019.

All content from Kiddle encyclopedia articles (including the article images and facts) can be freely used under Attribution-ShareAlike license, unless stated otherwise. Cite this article:
Charles Michel Facts for Kids. Kiddle Encyclopedia.