Armenia (officially called the Republic of Armenia) is a country in the western part of Asia. Its capital city is Yerevan. Armenia received its independence from the Soviet Union in 1991.

There are some minorities living in Armenia, such as Greek, Russian, and other minorities, and more than 90% of the people are ethnic Armenians. Also, the Armenian Apostolic Church, is by far the largest religion in the country. There is a small amount of other Christians, Muslims and atheists.

Armenia is the place that some Christians believe Noah's Ark landed, and Noah's family settled. The Armenian name for Armenia (Hayastan) means Land of Haik. Haik was the name of a great-great-grandson of Noah.

Throughout history, Armenia's size has changed many times. Today Armenia is much smaller than it was once. In 80 BCE, the Kingdom of Armenia covered parts of what is today Turkey, Syria, Lebanon, Iran, Iraq, Azerbaijan, and, of course, Armenia.

Today, Armenia's borders are locked with Turkey and Azerbaijan, due to conflicts. In 1992, Armenia and Azerbaijan had a war over the land of Nagorno-Karabakh. The fighting stopped in 1994, and Armenia has had control over this land, but Azerbaijan still disputes about the land. 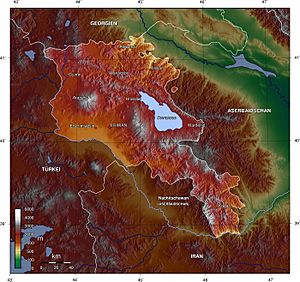 Armenia is landlocked in the South Caucasus. It is between the Black and Caspian Seas. The country is bordered on the north and east by Georgia and Azerbaijan, and on the south and west by Iran and Turkey.

It covers an area of 29,743 square kilometres (11,484 sq mi). The land is mostly mountains, with fast flowing rivers and few forests. There are hot summers and cold winters.

Mount Ararat used to be part of Armenia. It is the highest mountain in the region. It is now in Turkey, but clearly visible in Armenia. The Armenians see it as a symbol of their land. Because of this, the mountain is present on the Armenian national emblem today.

Armenia is divided into ten provinces and the capital city of Yerevan. As of 2007, Armenia includes 915 communities. 49 are considered urban and 866 are considered rural. For a list of communities see List of settlements in Armenia.

Armenia has many cities. Here is a list of the ten biggest ones: 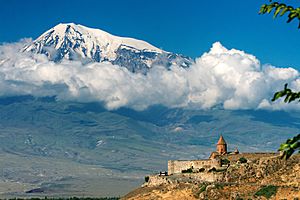 The 7th-century Khor Virap monastery in the shadow of Mount Ararat, the peak on which Noah's Ark is said to have landed during the biblical flood.

The climate in Armenia is markedly continental. Summers are dry and sunny, lasting from June to mid-September. The temperature fluctuates between 22 and 36 °C (72 and 97 °F). However, the low humidity level mitigates the effect of high temperatures. Evening breezes blowing down the mountains provide a welcome refreshing and cooling effect. Springs are short, while falls are long. Autumns are known for their vibrant and colorful foliage.

Winters are quite cold with plenty of snow, with temperatures ranging between −10 and −5 °C (14 and 23 °F). Winter sports enthusiasts enjoy skiing down the hills of Tsakhkadzor, located thirty minutes outside Yerevan. Lake Sevan, nestled up in the Armenian highlands, is the second largest lake in the world relative to its altitude, at 1,900 metres (6,234 ft) above sea level. 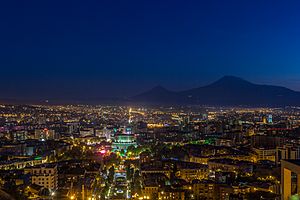 A vibrant Yerevan at dusk

The Armenian economy heavily relies on investment and support from Armenians abroad. Before independence, Armenia's economy was largely industry-based – chemicals, electronics, machinery, processed food, synthetic rubber, and textile – and highly dependent on outside resources. The republic had developed a modern industrial sector, supplying machine tools, textiles, and other manufactured goods to sister republics in exchange for raw materials and energy.

Agriculture accounted for less than 20% of both net material product and total employment before the dissolution of the Soviet Union in 1991. After independence, the importance of agriculture in the economy increased markedly.

Armenian mines produce copper, zinc, gold, and lead. The vast majority of energy is produced with fuel imported from Russia, including gas and nuclear fuel (for its one nuclear power plant); the main domestic energy source is hydroelectric. Small amounts of coal, gas, and petroleum have not yet been developed. 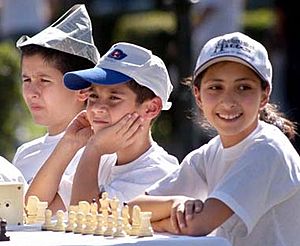 Armenian children at the UN Cup Chess Tournament in 2005.

Armenia has a population of 3,238,000 (2008 est.) and is the second most densely populated of the former Soviet republics. There has been a problem of population decline due to elevated levels of emigration after the break-up of the USSR. The rates of emigration and population decline, however, have decreased drastically in the recent years, and a moderate influx of Armenians returning to Armenia have been the main reasons for the trend, which is expected to continue. In fact Armenia is expected to resume its positive population growth by 2010.

Ethnic Armenians make up 97.9% of the population. Yazidis make up 1.3%, and Russians 0.5%. Other minorities include Assyrians, Ukrainians, Greeks, Kurds, Georgians, and Belarusians. There are also smaller communities of Vlachs, Mordvins, Ossetians, Udis, and Tats. Minorities of Poles and Caucasus Germans also exist though they are heavily Russified.

During the Soviet era, Azerbaijanis were historically the second largest population in the country (forming about 2.5% in 1989). However, due to the conflict over Nagorno-Karabakh virtually all of them emigrated from Armenia to Azerbaijan.

Armenian is the only official language even though Russian is widely used, especially in education, and could be considered as de facto "second language". 94% of adult Armenians consider it important that their children learn Russian. 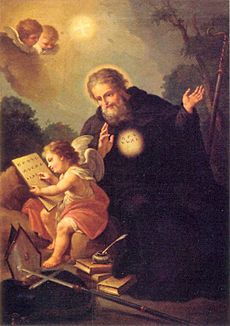 Armenians have their own distinctive alphabet and language. The alphabet was invented in AD 405 by Saint Mesrob Mashtots and consists of thirty-eight letters, two of which were added during the Cilician period. 96% of the people in the country speak Armenian, while 75.8% of the population additionally speaks Russian although English is becoming increasingly popular.

One of the oldest types of Armenian music is the Armenian chant which is the most common kind of religious music in Armenia. Many of these chants are ancient in origin, extending to pre-Christian times, while others are relatively modern, including several composed by Saint Mesrop Mashtots, the inventor of the Armenian alphabet.

All content from Kiddle encyclopedia articles (including the article images and facts) can be freely used under Attribution-ShareAlike license, unless stated otherwise. Cite this article:
Armenia Facts for Kids. Kiddle Encyclopedia.