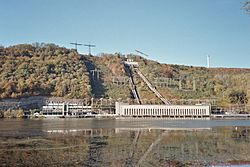 A hydroelectic power station in Germany 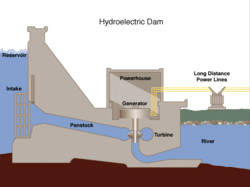 The energy of falling water has been used by humans for thousands of years.

Hydroelectricity is electricity that is made by the movement of water. It is usually made with dams that block a river to make a reservoir or collect water that is pumped there. When the water is "let go", the huge pressure behind the dam forces the water down pipes that lead to a turbine. This causes the turbine to turn, which turns a generator which makes electricity. This use of renewable energy produces less pollution than steam engines do. Some places such as Norway and Quebec get most of their electricity this way. 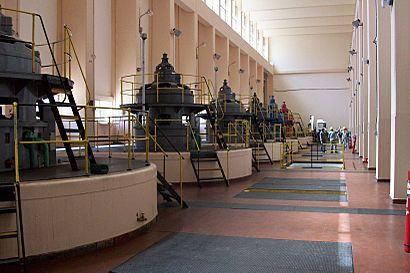 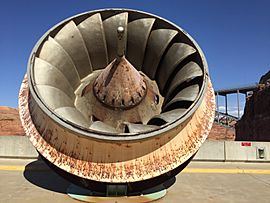 An old impeller on display at the Glen Canyon Dam 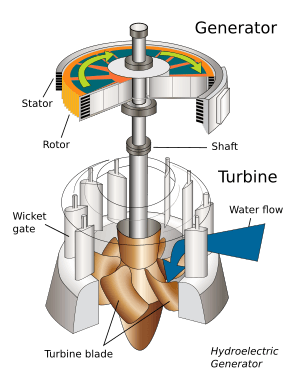 A typical turbine and generator

Most hydroelectric power comes from the potential energy of dammed water driving a water turbine and generator. The power extracted from the water depends on the volume and on the difference in height between the source and the water's outflow. This height difference is called the head. A large pipe (the "penstock") delivers water from the reservoir to the turbine.

This method produces electricity to supply high peak demands by moving water between reservoirs at different elevations. At times of low electrical demand, the excess generation capacity is used to pump water into the higher reservoir. When the demand becomes greater, water is released back into the lower reservoir through a turbine. Pumped-storage schemes currently provide the most commercially important means of large-scale grid energy storage and improve the daily capacity factor of the generation system. Pumped storage is not an energy source, and appears as a negative number in listings.

Run-of-the-river hydroelectric stations are those with small or no reservoir capacity, so that only the water coming from upstream is available for generation at that moment, and any oversupply must pass unused. A constant supply of water from a lake or existing reservoir upstream is a significant advantage in choosing sites for run-of-the-river. In the United States, run of the river hydropower could potentially provide 60,000 megawatts (80,000,000 hp) (about 13.7% of total use in 2011 if continuously available).

A tidal power station makes use of the daily rise and fall of ocean water due to tides; such sources are highly predictable, and if conditions permit construction of reservoirs, can also be dispatchable to generate power during high demand periods. Less common types of hydro schemes use water's kinetic energy or undammed sources such as undershot water wheels. Tidal power is viable in a relatively small number of locations around the world. In Great Britain, there are eight sites that could be developed, which have the potential to generate 20% of the electricity used in 2012.

Currently, only four facilities over 10 GW (10,000 MW) are in operation worldwide, see table below.

Panoramic view of the Itaipu Dam, with the spillways (closed at the time of the photo) on the left. In 1994, the American Society of Civil Engineers elected the Itaipu Dam as one of the seven modern Wonders of the World.

Small hydro is the development of hydroelectric power on a scale serving a small community or industrial plant. The definition of a small hydro project varies but a generating capacity of up to 10 megawatts (MW) is generally accepted as the upper limit of what can be termed small hydro. This may be stretched to 25 MW and 30 MW in Canada and the United States. Small-scale hydroelectricity production grew by 28% during 2008 from 2005, raising the total world small-hydro capacity to 85 GW. Over 70% of this was in China (65 GW), followed by Japan (3.5 GW), the United States (3 GW), and India (2 GW). 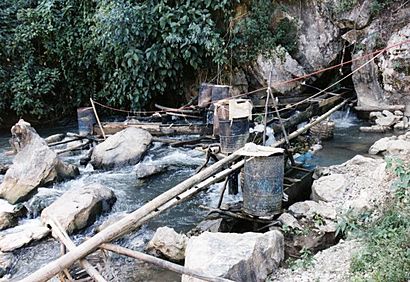 A micro-hydro facility in Vietnam 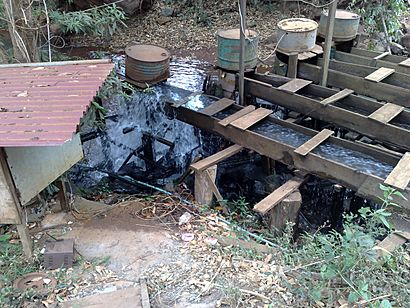 Small hydro stations may be connected to conventional electrical distribution networks as a source of low-cost renewable energy. Alternatively, small hydro projects may be built in isolated areas that would be uneconomic to serve from a network, or in areas where there is no national electrical distribution network. Since small hydro projects usually have minimal reservoirs and civil construction work, they are seen as having a relatively low environmental impact compared to large hydro. This decreased environmental impact depends strongly on the balance between stream flow and power production.

Micro hydro is a term used for hydroelectric power installations that typically produce up to 100 kW of power. These installations can provide power to an isolated home or small community, or are sometimes connected to electric power networks. There are many of these installations around the world, particularly in developing nations as they can provide an economical source of energy without purchase of fuel. Micro hydro systems complement photovoltaic solar energy systems because in many areas, water flow, and thus available hydro power, is highest in the winter when solar energy is at a minimum.

Pico hydro is a term used for hydroelectric power generation of under 5 kW. It is useful in small, remote communities that require only a small amount of electricity. For example, to power one or two fluorescent light bulbs and a TV or radio for a few homes. Even smaller turbines of 200-300W may power a single home in a developing country with a drop of only 1 m (3 ft). A Pico-hydro setup is typically run-of-the-river, meaning that dams are not used, but rather pipes divert some of the flow, drop this down a gradient, and through the turbine before returning it to the stream.

An underground power station is generally used at large facilities and makes use of a large natural height difference between two waterways, such as a waterfall or mountain lake. An underground tunnel is constructed to take water from the high reservoir to the generating hall built in an underground cavern near the lowest point of the water tunnel and a horizontal tailrace taking water away to the lower outlet waterway. 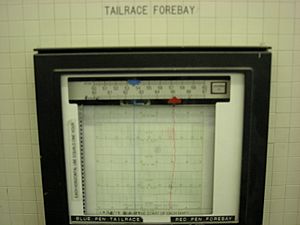 Measurement of the tailrace and forebay rates at the Limestone Generating Station in Manitoba, Canada.

The way the electricity is produced does not harm the environment as much as fossil fuels like oil or coal do. Hydroelectricity is very powerful and safe, and produces no waste.

Another advantage is that hydroelectricity cannot run out as long as there is a good water supply. Once the dam is built, the electricity costs very little, no waste or pollution is produced, and electricity can be generated whenever it is needed.

A few hydro turbines do not have a dam but instead use the current of the "run of the river". They produce less electricity and cannot store energy for later use.

The building of large dams to hold water can damage the environment. In 1983, the Australian government stopped the Tasmanian state government from building a dam on the Gordon River in Tasmania after a huge public protest. The dam would have flooded the beautiful Franklin River. The Three Gorges Dam in China will be the world's largest hydroelectricity project. The dam has flooded a huge area, meaning that 1.2 million people have had to be moved. Scientists are concerned about many problems with the dam, such as pollution, silt, and the danger of the dam wall breaking.

All content from Kiddle encyclopedia articles (including the article images and facts) can be freely used under Attribution-ShareAlike license, unless stated otherwise. Cite this article:
Hydroelectricity Facts for Kids. Kiddle Encyclopedia.