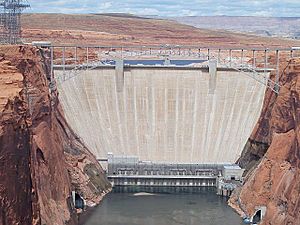 Glen Canyon Dam is a large dam on the Colorado River. It is in Page, Arizona. The dam is 583 feet high and it is 1,560 feet wide. It creates Lake Powell which is 186 miles long. The purpose of the dam is to create electricity and to prevent floods. The reservoir can store 27 million acre-feet of water (which is the amount of water that can cover one acre to 1 foot deep). Construction of the dam began in 1956. It was able to begin storing the flow of the river in 1963.

All content from Kiddle encyclopedia articles (including the article images and facts) can be freely used under Attribution-ShareAlike license, unless stated otherwise. Cite this article:
Glen Canyon Dam Facts for Kids. Kiddle Encyclopedia.