Lake Powell is a reservoir on the Colorado River, straddling the border between Utah and Arizona (most of it, along with Rainbow Bridge, is in Utah). It is a major vacation spot that around two million people visit every year. It is the second largest man-made reservoir by maximum water capacity in the United States behind Lake Mead, storing 24,322,069 acre feet (3.0000830×1010 m3) of water when full. However, due to high water withdrawals for human and agricultural consumption, and because of subsequent droughts in the area, Lake Powell is currently larger than Lake Mead in terms of volume of water currently held, depth and surface area.

Lake Powell was created by the flooding of Glen Canyon by the Glen Canyon Dam, which also led to the creation of Glen Canyon National Recreation Area, a popular summer destination. The reservoir is named for explorer John Wesley Powell, a one-armed American Civil War veteran who explored the river via three wooden boats in 1869.

In 1972, Glen Canyon National Recreation Area was established. It is public land managed by the National Park Service, and available to the public for recreational purposes. It lies in parts of Garfield, Kane, and San Juan counties in southern Utah, and Coconino County in northern Arizona. The northern limits of the lake extend at least as far as the Hite Crossing Bridge. A map centered at the confluence of the Escalante River 37°17′22″N 110°52′20″W﻿ / ﻿37.28944°N 110.87222°W﻿ / 37.28944; -110.87222 with the Colorado River gives a good view of the extent of the lake.

In the 1940s and early 1950s, the U.S. Bureau of Reclamation planned to construct a series of Colorado River dams in the rugged Colorado Plateau province of Colorado, Utah, and Arizona. Glen Canyon Dam was born of a controversial damsite the Bureau selected in Echo Park, in what is now Dinosaur National Monument in Colorado. A small but politically effective group of objectors led by David Brower of the Sierra Club succeeded in defeating the Bureau's bid, citing Echo Park's natural and scenic qualities as too valuable to submerge. By agreeing to a relocated damsite near Lee's Ferry between Glen and Grand Canyons, however, Brower did not realize what he had gambled away. At the time, Brower had not actually been to Glen Canyon. When he later saw Glen Canyon on a river trip, Brower discovered that it had the kind of scenic, cultural, and wilderness qualities often associated with America's national parks. Over 80 side canyons in the colorful Navajo Sandstone contained clear streams, abundant wildlife, arches, natural bridges, and numerous Native American archeological sites. By then, however, it was too late to stop the Bureau and its commissioner Floyd Dominy from building Glen Canyon Dam. Brower believed the river should remain free, and would forever after consider the loss of Glen Canyon his life's ultimate disappointment. 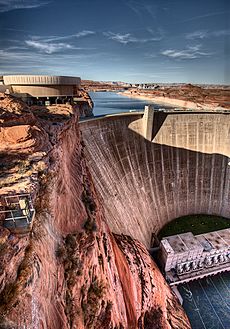 Construction on Glen Canyon Dam began with a demolition blast keyed by the push of a button by President Dwight D. Eisenhower at his desk in the Oval Office on October 1, 1956. The first blast started clearing tunnels for water diversion. On February 11, 1959, water was diverted through the tunnels so dam construction could begin. Later that year, the bridge was completed, allowing trucks to deliver equipment and materials for the dam, and also for the new town of Page, Arizona. 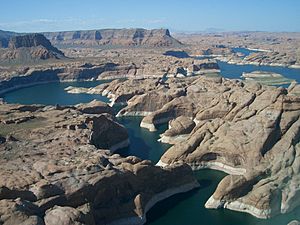 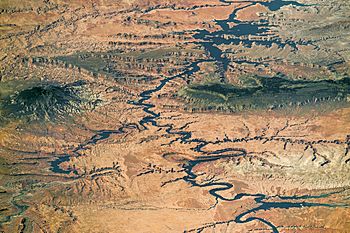 Lake Powell and Grand Staircase-Escalante from space, 2016. Note that North is to lower right. Photo shows nearly the entire length of Lake Powell.

Colorado River levels returned to normal during water years 2014 and 2015 (pushing the lake to 3,606 feet (1,099 m) by the end of water year 2015), a trend projected to continue in 2016. However, the Bureau of Reclamation in 2014 reduced the Lake Powell release from 8.23 to 7.48 million acre-feet, for the first time since the lake filled in 1980. This was done due to the "equalization" guideline which stipulates that an approximately equal amount of water must be retained in both Lake Powell and Lake Mead, in order to preserve hydro-power generation capacity at both lakes. This resulted in Lake Mead declining to the lowest level on record since the 1930s.

These data are for the Wahweap climate station on Lake Powell just south of the Utah-Arizona border. 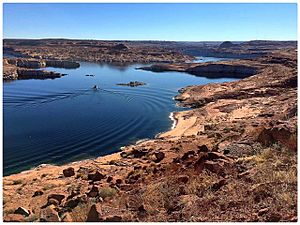 The southwestern portion of Lake Powell in Arizona 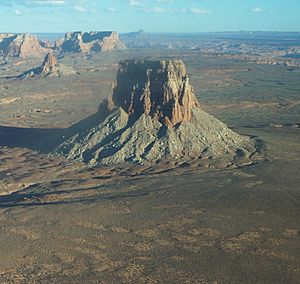 Glen Canyon was carved by differential erosion from the Colorado River over an estimated 5 million years. The Colorado Plateau, through which the canyon cuts, arose some 11 million years ago. Within that plateau lie layers of rock from over 300 million years ago to the relatively recent volcanic activity. Pennsylvanian and Permian formations can be seen in Cataract Canyon and San Juan Canyon. The Moenkopi Formation, which dates from 230 million years ago (Triassic Period), and the Chinle Formation are found at Lees Ferry and the Rincon. Both formations are the result of the ancient inland sea that covered the area. Once the sea drained, windblown sand invaded the area, creating what is known as Wingate Sandstone.

The more recent (Jurassic Period) formations include Kayenta Sandstone, which produces the trademark blue-black "desert varnish" that streaks down many walls of the canyons. Above this is Navajo Sandstone. Many of the arches, including Rainbow Bridge, lie at this transition point. This period also includes light yellow Entrada Sandstone, and the dark brown, almost purple Carmel Formation. These latter two can be seen on the tops of mesas around Wahweap, and the crown of Castle Rock and Tower Butte. Above these layers lie the sandstone, conglomerate and shale of the Straight Cliffs Formation that underlies the Kaiparowits Plateau and San Rafael Swell to the north of the lake.

The confluences of the Escalante, Dirty Devil and San Juan rivers with the Colorado lie within Lake Powell. The slower flow of the San Juan river has produced goosenecks where 5 miles (8.0 km) of river are contained within 1-mile (1.6 km) on a straight line. 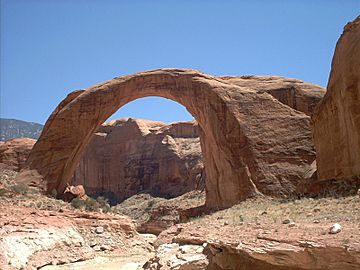 Lake Powell has been a shooting location for 45 television series and films, including: 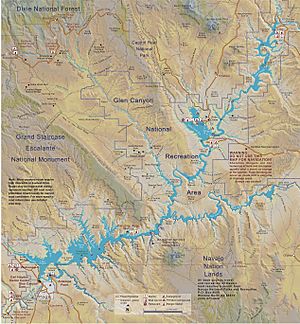 The lake's main body stretches up Glen Canyon, but has also filled many (over 90) side canyons. The lake also stretches up the Escalante River and San Juan River where they merge into the main Colorado River. This provides access to many natural geographic points of interest as well as some remnants of the Anasazi culture. 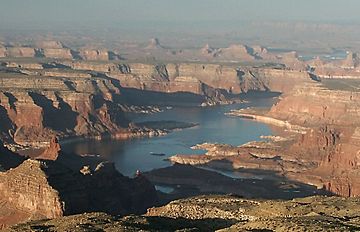 The section of Lake Powell near Dangling Rope Marina, looking southwest at sunrise.

Access to the lake is limited to developed marinas because most of the lake is surrounded by steep sandstone walls:

The following marinas are accessible only by boat:

Glen Canyon National Recreation Area draws more than two million visitors annually. Recreational activities include boating, fishing, waterskiing, jet-skiing, and hiking. Prepared campgrounds can be found at each marina, but many visitors choose to rent a houseboat or bring their own camping equipment, find a secluded spot somewhere in the canyons, and make their own camp (there are no restrictions on where visitors can stay).

The Castle Rock Cut is one of the most important navigational channels in the lake; it was blasted as early as the 1970s to allow boaters to bypass the winding canyons between the Glen Canyon Dam and reaches of Lake Powell further upstream – saving, on average, one hour of travel time. The cut has been deepened several times since then, to allow the use of the channel during droughts. During the protracted 21st century drought, however, the lake has dropped so quickly on several occasions that the cut dried up during the summer tourist season, most recently in 2013. Continued deepening of the Castle Rock cut has been criticized for its high cost, but boaters and the National Park Service argue that it improves safety, saves millions of dollars in fuel, and improves emergency response time.

Currently most Marinas on the lake don't have Automatic Identification System monitoring stations that transmit boat positions to the AIS websites for the boating community. A substantial number of vessels on the lake do not have AIS transponders as there currently are no mandatory requirements for AIS usage for this body of water. Extra precautions must be taken with respect to boating safety, as the fractal nature of the lake's hydrologic surface area can allow vessels with limited charting equipment to become easily lost.

The burying of human (and pet) waste in Glen Canyon National Recreation Area is prohibited. Anyone who camps farther than a quarter of a mile from a marina, however, must bring a portable toilet. Pet waste must also be packed out.

Some of these fish species are on the US Endangered Species List. Currently most native species on the Colorado River Basin are subject to ongoing restoration efforts of some kind.

Carp, pike and others

Zebra and quagga mussels first appeared in the United States in the 1980s.

The mussels were initially brought to the United States through the ballast water of ships entering the Great Lakes. These aquatic invaders soon spread to many bodies of water in the Eastern United States and have even made their way to the western United States. In January 2008, Zebra mussels have been detected in several reservoirs along the Colorado River system such as Lakes Mead, Mojave, and Havasu.

By the early 2000s Arizona, California, Nebraska, Kansas, Colorado, Nevada and Utah have all confirmed the presence of larval zebra mussels in lakes and reservoirs.

Zebra and quagga mussels can be destructive to an ecosystem due to competition for resources with native species. The filtration of zooplankton by the mussels can negatively impact the feeding for some species of fish. Zebra and quagga mussels can attach to hard surfaces and build layers on underwater structures. The mussels are known to clog pipes including those in hydroelectric power systems, thus becoming a costly and time-consuming problem for water managers in the West.

Control policies have recently been introduced to alleviate the hydroelectric problems as well as ecological problems faced by Western infestation. Beginning in 1999 Lake Powell began to visually monitor for the mussels.

In 2001 hot water boat decontamination sites were established at Wahweap, Bullfrog, and Halls Crossing marinas. In January 2007, zebra mussels were detected in Lake Mead and new action plans were announced to prevent the spread of mussels to Lake Powell. In August 2007, preliminary testing was positive for zebra or quagga larvae in Lake Powell. These tests were deemed false positives, but adult quagga mussels were found in 2013.

In August 2010, Lake Powell was declared mussel free. Lake Powell introduced a mandatory boat inspection for each watercraft entering the reservoir beginning in June 2009. Effective June 29, 2009, every vessel entering Lake Powell must have a mussel certificate, although boat owners were allowed to self-certify. These measures were intended to help prevent vessels from transporting Zebra mussels into Lake Powell.

Despite these measures, quagga mussel DNA was detected in 2012 and live mussels were found at a number of sites in Spring and Summer 2013. As of June 2013 the NPS was attempting a diver based eradication program to find and remove mussels before the lake becomes infested.

All content from Kiddle encyclopedia articles (including the article images and facts) can be freely used under Attribution-ShareAlike license, unless stated otherwise. Cite this article:
Lake Powell Facts for Kids. Kiddle Encyclopedia.