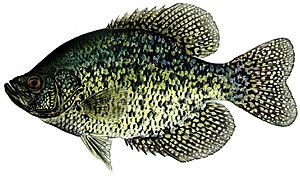 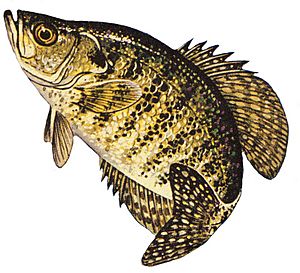 The crappies are a genus, Pomoxis, of North American freshwater fish. They are members of the sunfish family Centrarchidae. Both species in this genus are popular game fish. These are the Black crappie and the White crappie. The White crappie is the state fish of Louisiana.

The genus name Pomoxis comes from the Greek πώμα (cover, plug, operculum) and οξύς (sharp). The common name (also spelled croppie or crappé), comes from the Canadian French crapet, which refers to many different fishes of the sunfish family. Other names for crappie are papermouths, strawberry bass, speckled bass or specks (especially in Michigan), speckled perch, calico bass (throughout New England), sac-a-lait (in southern Louisiana, lit. "milk bag", a rendition of Choctaw sakli) and Oswego bass.

The currently recognized species in this genus are:

Crappies are both preditors and prey. Both species of crappie as adults feed predominantly on smaller fish species. This includes the young of their own predators (which include the northern pike, muskellunge, and walleye). They have varied diets, however, including zooplankton, insects, and crustaceans. By day, crappie tend to be less active and to concentrate around weed beds or submerged objects, such as logs and boulders. They feed especially at dawn and dusk, moving then into open water or approaching the shore.

The Pomoxis species are highly regarded game fishes and are often considered to be among the best-tasting freshwater fish. Because of the variety of their diets, crappies may be caught in many ways. This includes casting light jigs, trolling with minnows or artificial lures. Small spinnerbaits, or using bobbers are also very effective. Crappies are very popular with ice-fishermen, as they are active in winter. The current all-tackle fishing world record for a black crappie is 2.25 kg (5.0 lb) and for a white crappie is 2.35 kg (5.2 lb). 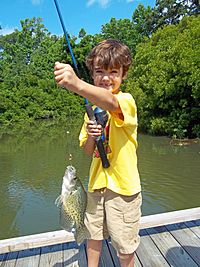 It doesn't take an expert to catch crappies

Angling for crappies is popular throughout much of North America. Methods vary, but among the most popular is called "Spider Rigging," a method characterized by a fisherman in a boat with many long fishing rods pointing away from the angler at various angles like spokes from a wheel. Anglers who employ the Spider Rigging method may choose from among many popular baits, like corn. Many anglers also chum or dump live bait into the water to attract the fish hoping the fish will bite their bait. There are many types of lures that catch crappies. Jigs, especially with a live minnow are very effective. Spoons, Spinners and Crankbaits are all effective at different times.

All content from Kiddle encyclopedia articles (including the article images and facts) can be freely used under Attribution-ShareAlike license, unless stated otherwise. Cite this article:
Crappie Facts for Kids. Kiddle Encyclopedia.