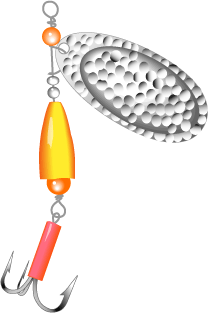 An example of a fishing lure 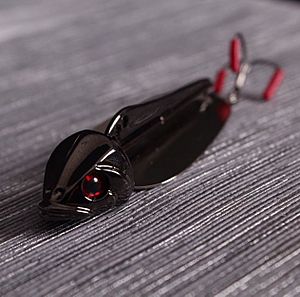 A fishing lure is an object used to catch fish. It is tied to the end of a fishing line. A fishing lure is made to look like something a fish would eat. They move in a special way and have certain colors. Lures have fishing hooks attached to them.

They are usually used with a fishing rod. When a lure is used, it is cast, or thrown, out into the water and pulled back in. A good fisherman can cast the lure into places where the fish hide, like under logs.

There are many types of fishing lures. Most of them are made to look like dying, injured, or fast fish. They can be made of wood, plastic, rubber, metal, cork, feathers, animal hair, and other things. Some are shiny so that they catch the fish's attention.

Fishing lures can come in many different types such as a jig or a popper. A jig will usually have a weight attached to it so it can float at the right height. A popper is a lure used to attract trout and bass. A popper has a colorful design in the front to attract fish. Fishing lures can be very expensive as some are sold for thousands of dollars.

The fishing lure was invented in 1890 by a man named James Heddon. He created the fishing lure by accident by taking a big piece of wood and carving a frog shape into it and taking the lure and attaching it to his line. Then he threw it in the water and immediately caught a bass. The next day he started a company called the Heddon Company and the era of the fishing lure was born.

Attaching a bass fishing lure to a fishing line 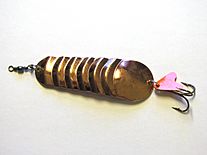 There are many types of fishing lures. In most cases they are manufactured to resemble prey for the fish, but they are sometimes engineered to appeal to a fishes' sense of territory, curiosity or aggression. Most lures are made to look like dying, injured, or fast moving fish. They include the following types:

Fishing lures can be made of wood, plastic, rubber, metal, cork, and materials like feathers, animal hair, string, tinsel and others. They can have many moving parts or no moving parts. They can be retrieved fast or slow. Some of the lures can be used by alone, or with another lure.

One advantage of use of artificial lures is a reduction in use of bait. This contributes to resolving one of the marine environment's more pressing problems; the undermining of marine food webs by overharvesting "bait" species which tend to occur lower in the food chain. Another advantage of lures is that their use promotes improved survival of fish during catch and release fishing. This is because lures reduce the incidence of deep hooking which has been correlated to fish mortality in many studies.

All content from Kiddle encyclopedia articles (including the article images and facts) can be freely used under Attribution-ShareAlike license, unless stated otherwise. Cite this article:
Fishing lure Facts for Kids. Kiddle Encyclopedia.