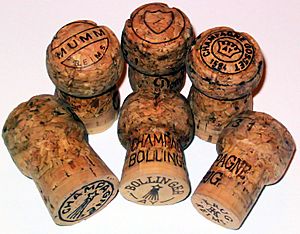 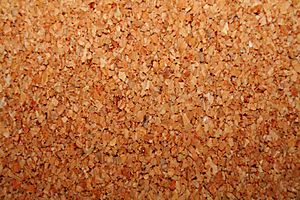 Cork is a material that is harvested for commercial use primarily from the bark of the Cork Oak tree. Portugal produces 50% of cork worldwide.

The cork industry is generally regarded as environmentally friendly. The sustainability of its production and the easy recycling of cork products and by-products are two of its most distinctive aspects.

Cork demand has increased due to a larger proportion of wine being sealed with cork rather than being sold in bulk. Top quality corks are quite expensive, so many cheaper brands have switched to lower quality cork, synthetic plastic stoppers, screwcaps, or other closures. 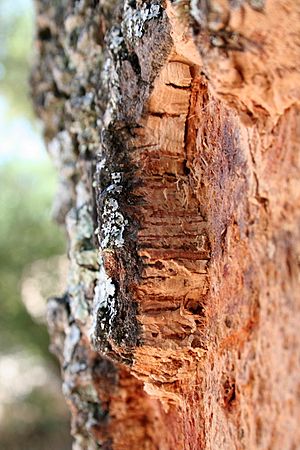 The cork industry is generally regarded as environmentally friendly. Cork production is generally considered sustainable because the cork tree is not cut down to obtain cork; only the bark is stripped to harvest the cork. The tree continues to live and grow. The sustainability of production and the easy recycling of cork products and by-products are two of its most distinctive aspects. Cork Oak forests also prevent desertification and are a particular habitat in the Iberian Peninsula and the refuge of various endangered species. 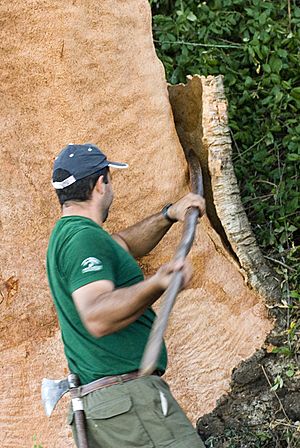 Cork is extracted only from early May to late August, when the cork can be separated from the tree without causing permanent damage. When the tree reaches 25–30 years of age and about 24in (60 cm) in circumference, the cork can be removed for the first time. However, this first harvest almost always produces poor quality cork. Bark from initial harvests can be used to make flooring, shoes, insulation and other industrial products.

The workers who specialize in removing the cork are known as extractors. Extractors use a very sharp axe to make two types of cuts on the tree: one horizontal cut around the plant, called a crown or necklace, at a height of about 2-3 times the circumference of the tree, and several vertical cuts called rulers or openings. This is the most delicate phase of the work because, even though cutting the cork requires quite a bit of strength, the extractor must not damage the underlying phellogen or the tree will be harmed.

To free the cork from the tree, the extractor pushes the handle of the axe into the rulers. A good extractor needs to use a firm but precise touch in order to free a large amount of cork without damaging the product or tree.

These freed portions of the cork are called planks. The planks are usually carried off by hand since cork forests are rarely accessible to vehicles. The cork is stacked in piles in the forest or in yards at a factory, and traditionally, left to dry, after which it can be loaded onto a truck and shipped to a processor. 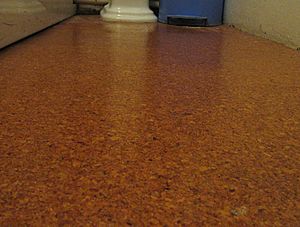 Varnished cork tiles can be used for flooring, as an alternative for linoleum, stone or ceramic tiles

Cork's elasticity combined with its near-impermeability makes it suitable as a material for bottle stoppers, especially for wine bottles. Cork stoppers represent about 60% of all cork based production.

Cork is also an essential element in the production of badminton shuttlecocks.

Sheets of cork, also often the by-product of stopper production, are used to make bulletin boards as well as floor and wall tiles.

Cork's low density makes it a suitable material for fishing floats and buoys, as well as handles for fishing rods (as an alternative to neoprene).

Use in wine bottling 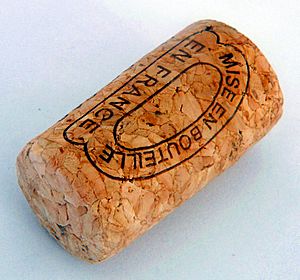 A cork stopper for a wine bottle

As late as the mid-17th century, French vintners did not use cork stoppers, using instead oil-soaked rags stuffed into the necks of bottles.

Wine corks can be made of either a single piece of cork, or composed of particles, as in champagne corks; corks made of granular particles are called "agglomerated corks".

Natural cork closures are used for about 80% of the 20 billion bottles of wine produced each year. After a decline in use as wine-stoppers due to the increase in the use of synthetic alternatives, cork wine-stoppers are making a comeback and currently represent approximately 60% of wine-stoppers today. 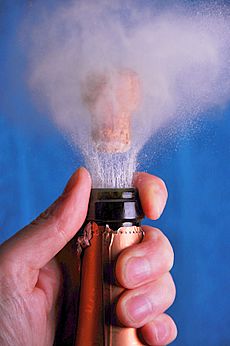 Because of the cellular structure of cork, it is easily compressed upon insertion into a bottle and will expand to form a tight seal.

The study "Analysis of the life cycle of Cork, Aluminum and Plastic Wine Closures," and commissioned by a major cork manufacturer, concluded that cork is the most environmentally responsible stopper, in a one-year life cycle analysis comparison with plastic stoppers and aluminum screw caps. 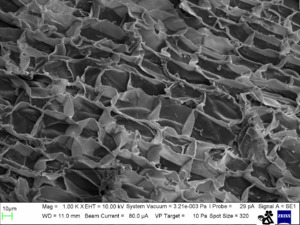 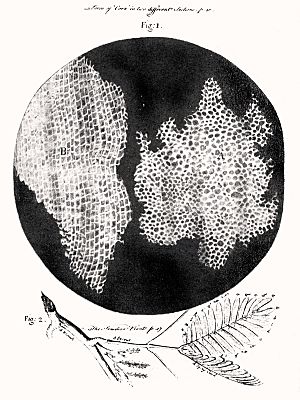 The famous early (1665) micrograph of cork, drawn by Robert Hooke

Cork is used in musical instruments, particularly woodwind instruments, where it is used to fasten together segments of the instrument, making the seams airtight. Low quality conducting baton handles are also often made out of cork.

It is also used in shoes, especially those using Goodyear Welt Construction.

Cork can be used to make bricks for the outer walls of houses, as in Portugal's pavilion at Expo 2000.

Cork is used as the core of both baseballs and cricket balls. A corked bat is made by replacing the interior of a baseball bat with cork—a practice known as "corking". It was historically a method of cheating at baseball; the efficacy of the practice is now discredited.

Cork is often used, in various forms, in spacecraft heat shields and fairings.

Cork can be used in the paper pick-up mechanisms in inkjet and laser printers.

Cork is also used inside footwear to improve climate control and comfort.

Corks are also hung from hats to keep insects away. (See cork hat)

Cork has been used as a core material in sandwich composite construction.

Cork can be used as the friction lining material of an automatic transmission clutch, as designed in certain mopeds.

Cork can be used instead of wood or aluminium in automotive interiors.

Cork can also be used to make watch bands and faces as seen with Sprout Watches.

Cork slabs are sometimes used by orchid growers as a natural mounting material.

All content from Kiddle encyclopedia articles (including the article images and facts) can be freely used under Attribution-ShareAlike license, unless stated otherwise. Cite this article:
Cork (material) Facts for Kids. Kiddle Encyclopedia.