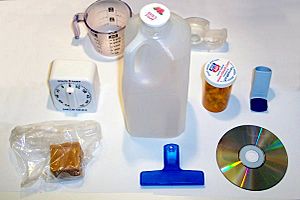 These objects are all made out of plastic.

A plastic is a material that can change its shape, so many things can be made of plastic. There are many types of plastic. Some can be shaped only when they are freshly made; then they become hard. Others can be changed by heating them up or even by melting them.

Most plastics are man-made; they do not occur in nature. Most are made from petroleum or natural gas. The process of making plastics is usually quite complicated. Most of the materials that are called plastic are polymers. Polymers are long chains of atoms bonded to one another.

People experimented with plastics based on natural polymers for a very long time. Alexander Parkes, an English inventor (1813-1890), created the earliest form of plastic in 1855. It was hard but flexible and transparent, and he called it "Parkesine."

Plastic is filling up the landfills and sometimes if you burn it, it releases toxic fumes. If we do not recycle, it becomes waste.

Plastics are mostly petrochemicals, made from petroleum, a type of oil. Engineers refine the petroleum which goes through a heating process. It develops ethylene and propylene, which are the chemical building blocks for many plastics. These chemicals are then combined with other chemicals to produce a polymer.

Well-known plastics, and their use 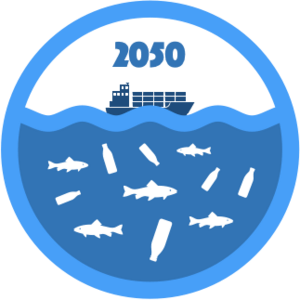 This infographic shows that there will (predicted) be more plastic in the oceans than fish by 2050.

Most plastics are durable and degrade very slowly, as their chemical structure renders them resistant to many natural processes of degradation. There are differing estimates of how much plastic waste has been produced in the last century. By one estimate, one billion tons of plastic waste have been discarded since the 1950s. Others estimate a cumulative human production of 8.3 billion tons of plastic of which 6.3 billion tons is waste, with a recycling rate of only 9%. Much of this material may persist for centuries or longer, given the demonstrated persistence of structurally similar natural materials such as amber.

The Ocean Conservancy reported that China, Indonesia, Philippines, Thailand, and Vietnam dump more plastic in the sea than all other countries combined. The rivers Yangtze, Indus, Yellow River, Hai River, Nile, Ganges, Pearl River, Amur, Niger, and the Mekong "transport 88–95% of the global [plastics] load into the sea."

The presence of plastics, particularly microplastics, within the food chain is increasing. In the 1960s microplastics were observed in the guts of seabirds, and since then have been found in increasing concentrations. The long-term effects of plastic in the food chain are poorly understood. In 2009, it was estimated that 10% of modern waste was plastic, although estimates vary according to region. Meanwhile, 50–80% of debris in marine areas is plastic.

Prior to the Montreal Protocol, CFCs were commonly used in the manufacture of polystyrene, and as such the production of polystyrene contributed to the depletion of the ozone layer.

In 2019 a new report "Plastic and Climate" was published. According to the report plastic wiil contribute Greenhouse gases in the equivalent of 850 million tons of Carbon dioxide (CO2) to the atmosphere in 2019. In current trend, annual emissions will grow to 1.34 billion tons by 2030. By 2050 plastic could emit 56 billion tons of Greenhouse gas emissions, as much as 14 percent of the earth’s remaining carbon budget.

The effect of plastics on global warming is mixed. Plastics are generally made from petroleum. If the plastic is incinerated, it increases carbon emissions; if it is placed in a landfill, it becomes a carbon sink although biodegradable plastics have caused methane emissions.

Due to the lightness of plastic versus glass or metal, plastic may reduce energy consumption. For example, packaging beverages in PET plastic rather than glass or metal is estimated to save 52% in transportation energy.

Production of plastics from crude oil requires 62 to 108 MJ/Kg (taking into account the average efficiency of US utility stations of 35%). Producing silicon and semiconductors for modern electronic equipment is even more energy consuming: 230 to 235 MJ/Kg of silicon, and about 3,000 MJ/Kg of semiconductors. This is much higher than the energy needed to produce many other materials, e.g. iron (from iron ore) requires 20-25 MJ/Kg of energy, glass (from sand, etc.) 18–35 MJ/Kg, steel (from iron) 20–50 MJ/Kg, paper (from timber) 25–50 MJ/Kg.

Plastics can be pyrolyzed into hydrocarbon fuels, since plastics include hydrogen and carbon. One kilogram of waste plastic produces roughly a liter of hydrocarbon.

Plastics contribute to approximately 10% of discarded waste. Depending on their chemical composition, plastics and resins have varying properties related to contaminant absorption and adsorption. Polymer degradation takes much longer as a result of saline environments and the cooling effect of the sea. These factors contribute to the persistence of plastic debris in certain environments. Recent studies have shown that plastics in the ocean decompose faster than was once thought, due to exposure to sun, rain, and other environmental conditions, resulting in the release of toxic chemicals such as bisphenol A. However, due to the increased volume of plastics in the ocean, decomposition has slowed down. The Marine Conservancy has predicted the decomposition rates of several plastic products. It is estimated that a foam plastic cup will take 50 years, a plastic beverage holder will take 400 years, a disposable nappy will take 450 years, and fishing line will take 600 years to degrade.

In 2018, a survey by the Global Oceanic Environmental Survey (GOES) Foundation found that the ecosystem in seas and oceans may collapse in the next 25 years, potentially causing failure of terrestrial ecosystem and "very possibly the end of life on Earth as we know it"; the main agents of this prediction were hypothesized to be plastic, ocean acidification, and ocean pollution. In order to prevent such a catastrophe, experts have proposed a total single use plastic ban, wood burning bans while planting "as many trees as possible," "pollution-free recycling of electronics, and by 2030 all industries to be zero toxic discharge." One British scientist advocates "special protection and perservation of peat bogs, wetlands, marshlands and mangrove swamps to ensure carbon dioxide is absorbed from the atmosphere."

Microbial species capable of degrading plastics are known to science, and some are potentially useful for the disposal of certain classes of plastic waste.

Thermoplastics can be remelted and reused, and thermoset plastics can be ground up and used as filler, although the purity of the material tends to degrade with each reuse cycle. There are methods by which plastics can be broken down to a feedstock state.

The greatest challenge to the recycling of plastics is the difficulty of automating the sorting of plastic wastes, making it labor-intensive. Typically, workers sort the plastic by looking at the resin identification code, although common containers like soda bottles can be sorted from memory. Typically, the caps for PETE bottles are made from a different kind of plastic which is not recyclable, which presents additional problems for the sorting process. Other recyclable materials such as metals are easier to process mechanically. However, new processes of mechanical sorting are being developed to increase the capacity and efficiency of plastic recycling.

While containers are usually made from a single type and color of plastic, making them relatively easy to sort, a consumer product like a cellular phone may have many small parts consisting of over a dozen different types and colors of plastics. In such cases, the resources it would take to separate the plastics far exceed their value and the item is discarded. However, developments are taking place in the field of active disassembly, which may result in more product components being reused or recycled. Recycling certain types of plastics can be unprofitable as well. For example, polystyrene is rarely recycled because the process is usually not cost effective. These unrecycled wastes are typically disposed of in landfills, incinerated or used to produce electricity at waste-to-energy plants.

An early success in the recycling of plastics is Vinyloop, an industrial process to separate PVC from other materials through dissolution, filtration and separation of contaminants. A solvent is used in a closed loop to elute PVC from the waste. This makes it possible to recycle composite PVC waste, which is normally incinerated or put in a landfill. Vinyloop-based recycled PVC's primary energy demand is 46 percent lower than conventionally produced PVC. The global warming potential is 39 percent lower. This is why the use of recycled material leads to a significantly better ecological outcome. This process was used after the Olympic Games in London 2012. Parts of temporary Buildings like the Water Polo Arena and the Royal Artillery Barracks were recycled. In this way, the PVC Policy could be fulfilled, which says that no PVC waste should be left after the games had ended.

In 1988, to assist recycling of disposable items, the Plastic Bottle Institute of the U.S. Society of the Plastics Industry devised a now-familiar scheme to mark plastic bottles by plastic type. Under this scheme, a plastic container is marked with a triangle of three "chasing arrows".

All content from Kiddle encyclopedia articles (including the article images and facts) can be freely used under Attribution-ShareAlike license, unless stated otherwise. Cite this article:
Plastic Facts for Kids. Kiddle Encyclopedia.