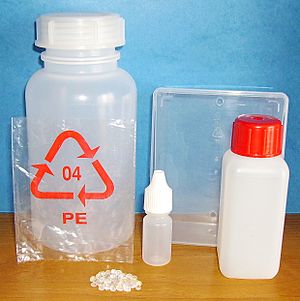 Objects made of polymers polyethylene and polypropylene

A polymer is a molecule, made from joining together many small molecules called monomers. The word "polymer" can be broken down into "poly" (meaning "many" in Greek) and "mer" (meaning "unit"). This shows how the chemical composition of a polymer consists of many smaller units (monomers) bonded together into a larger molecule. A chemical reaction bonding monomers together to make a polymer is called polymerization.

Many styrene molecules join together to make a polystyrene molecule. The squiggly lines at both ends of the polymer mean that just a short section of a long molecule is shown here.

If the monomers are not all the same, the polymer is called a "copolymer" or a "heteropolymer".

Many polymer molecules are like chains where the monomer units are the links. Polymer molecules can be straight-chain, have branching from the main chain, or cross-linking between chains. As an example of cross-linking, sulfhydryl (-S-H) groups in two cysteine amino acid units in polypeptide chains can bond together to make a disulfide bridge (-S-S-) joining the chains together.

All content from Kiddle encyclopedia articles (including the article images and facts) can be freely used under Attribution-ShareAlike license, unless stated otherwise. Cite this article:
Polymer Facts for Kids. Kiddle Encyclopedia.