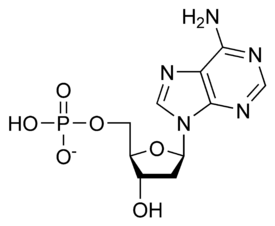 This nucleotide contains: the five-carbon sugar deoxyribose (at center), a nitrogenous base called adenine (upper right), and one phosphate group (left). The whole structure along with the phosphate group is a nucleotide, a constituent of DNA.

A nucleotide is an organic molecule. Nucleotides are the building blocks of the nucleic acids RNA and DNA. These two types of nucleic acid are essential biomolecules in all forms of life on Earth.

In DNA, the purine bases are adenine and guanine, and the pyrimidines are thymine and cytosine. RNA uses uracil in place of thymine. Adenine always pairs with thymine by 2 hydrogen bonds, while guanine pairs with cytosine through 3 hydrogen bonds, each due to their unique structures.

Nucleotides also play a central role in metabolism at a fundamental, cellular level. They provide chemical energy for the many cellular functions that need it. Examples are: amino acid, protein and cell membrane synthesis, moving the cell and cell parts (both internally and intercellularly), cell division, and so on. In addition, nucleotides work in cell signaling, and they are in important cofactors of enzymatic reactions (e.g. coenzyme A, FAD, FMN, NAD, and NADP+).

In experimental biochemistry, nucleotides can be labeled using radionuclides to make radionucleotides.

All content from Kiddle encyclopedia articles (including the article images and facts) can be freely used under Attribution-ShareAlike license, unless stated otherwise. Cite this article:
Nucleotide Facts for Kids. Kiddle Encyclopedia.