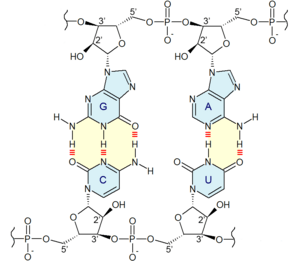 Nucleobases are important for genetics. They are parts of RNA and DNA that may be involved in pairing (see base pair).

They include cytosine, guanine, adenine, thymine in (DNA), uracil in (RNA) and xanthine and hypoxanthine (mutated forms of guanine and adenine). These are abbreviated as C, G, A, T, U, X and HX respectively. They are usually simply called bases in genetics. Because A, G, C and T appear in the DNA, these molecules are called DNA-bases; A, G, C and U are called RNA-bases.

All content from Kiddle encyclopedia articles (including the article images and facts) can be freely used under Attribution-ShareAlike license, unless stated otherwise. Cite this article:
Nucleobase Facts for Kids. Kiddle Encyclopedia.