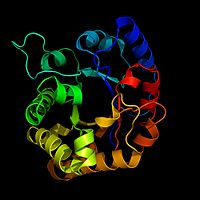 An enzyme is a protein molecule in cells which works as a biological catalyst. Enzymes speed up chemical reactions in the body, but do not get used up in the process, therefore can be used over and over again.

Almost all biochemical reactions in living things need enzymes. With an enzyme, chemical reactions go much faster than they would without the enzyme. Other biocatalysts are catalytic RNA molecules, called ribozymes.

The first enzyme was found in 1833 by Anselme Payen. 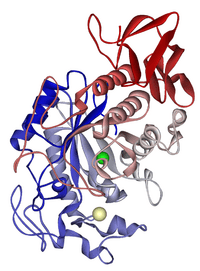 There are thousands of different enzymes and each one is specific to the reaction which it catalyses. Enzymes have names which show what they do. Enzyme names usually end in –ase to show that they are enzymes. Examples of this include ATP synthase. It makes a chemical called ATP. Another example is DNA polymerase. It reads an intact DNA strand and uses it as a template to make a new strand.

The proteases are a whole class of enzymes. They break down other enzymes and proteins back into amino acids. Nucleases are enzymes that cut DNA or RNA, often in specific place in the molecule.

Biochemists often draw a picture of an enzyme to use as a visual aid or map of the enzyme. This is hard to do because there may be hundreds or thousands of atoms in an enzyme. Biochemists can not draw all this detail. Instead, they use ribbon models as pictures of enzymes. Ribbon models can show the shape of an enzyme without having to draw every atom.

Most enzymes will not work unless the temperature and pH are just right. In mammals the right temperature is usually about 37oC degrees (body temperature). The correct pH can vary greatly. Pepsin is an example of an enzyme that works best when pH is about 1.5.

Heating an enzyme above a certain temperature will destroy the enzyme permanently. It will be broken down by protease and the chemicals will be used again.

Enzymes are very specific. In 1894 Emil Fischer suggested that both the enzyme and the substrate have specific complementary geometric shapes that fit exactly into one another. This is often referred to as "the lock and key" model. However, this model fails to explain what happens next.

Diagrams to show the induced fit hypothesis of enzyme action

In 1958, Daniel Koshland suggested a modification to the lock and key model. Since enzymes are rather flexible structures, the active site is reshaped by interactions with the substrate. As a result, the substrate does not simply bind to a rigid active site. The amino acid side-chains of the active site are bent into positions so the enzyme does its catalytic work. In some cases, such as glycosidases, the substrate molecule also changes shape slightly as it enters the active site.

The general equation for an enzyme reaction is:

Enzymes lower the activation energy of a reaction by forming an intermediary complex with the substrate. This complex is called an enzyme-substrate complex. 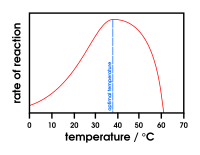 Graph showing the effect of changing temperature on enzyme activity 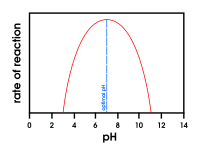 Graph showing the effect of changing pH on enzyme activity

There are five main ways that enzyme activity is controlled in the cell.

Inhibitors can be used to stop an enzyme from binding to a substrate. This may be done to slow down an enzyme-controlled reaction. The inhibitors fit loosely or partially into the enzyme's active site. This prevents or slows down an enzyme-substrate complex being formed.

Denaturation is the irreversible alteration of an enzyme's active site, caused by an extreme change in temperature or pH. It will decrease the rate of reaction because the substrate molecule will not be able to fit into the active site, so products cannot be formed.

Cofactors, or coenzymes, are helper molecules which are needed to make an enzyme work. They are not proteins, and may be organic or inorganic molecules. Both types of molecules sometimes contain a metal ion at the centre, such as Mg2+, Cu2+, Mn2+ or iron-sulphur clusters. This is because such ions may act as electron donors, and this is important in many reactions. The need of enzymes for various little helpers is the basic reason why animals, including ourselves, need trace elements and vitamins.

Enzymes are used commercially for:

All content from Kiddle encyclopedia articles (including the article images and facts) can be freely used under Attribution-ShareAlike license, unless stated otherwise. Cite this article:
Enzyme Facts for Kids. Kiddle Encyclopedia.