The pancreas belongs to two systems of the body: the digestive system for its role in breaking down nutrients, and the endocrine system for producing hormones.

The pancreas releases these hormones:

The pancreas releases many different enzymes to help digestion: 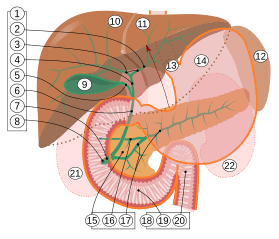 The pancreas is an organ that in humans lies in the upper left part of the abdomen. In adults, it is about 12–15 centimetres (4.7–5.9 in) long, lobulated, and salmon-coloured in appearance.

Anatomically, the pancreas is divided into a head, neck, body, and tail. The pancreas stretches from the inner curvature of the duodenum, where the head surrounds two blood vessels, the superior mesenteric artery, and vein. The longest part of the pancreas, the body, stretches across behind the stomach, and the tail of the pancreas ends adjacent to the spleen.

Two ducts, the main pancreatic duct and a smaller accessory pancreatic duct, run through the body of the pancreas, joining with the common bile duct near a small ballooning called the ampulla of Vater. Surrounded by a muscle, the sphincter of Oddi, this opens into the descending part of the duodenum.

The body of the pancreas travels from the head, separated by a short neck. The neck is about 2 cm (0.79 in) wide, and sits in front of the portal vein. The gastroduodenal artery and the anterior superior pancreaticoduodenal arteries travel in front of the gland and begin where the neck meets the head of the pancreas. The neck lies mostly behind the pylorus of the stomach.

All content from Kiddle encyclopedia articles (including the article images and facts) can be freely used under Attribution-ShareAlike license, unless stated otherwise. Cite this article:
Pancreas Facts for Kids. Kiddle Encyclopedia.