The gastrointestinal system is the body system that eats and digests food; it is also called a digestive system.

By breaking down food into simple chemicals that can be absorbed by other parts of the body so the chemicals can be used for energy and building the body, it also gets rid of waste after digestion. The gastrointestinal system starts at the lips and ends at the anus. Animals like worms, insects, mammals, birds, fish, and people all have digestive systems.

The gastrointestinal tract is the gut and other organs that help us digest food.

The gut is the round tubes that food goes through and is digested. The parts of the human, and some other animals, gut system are:

Food does not go through these organs. But they help the gut digest the food. They also have other work. For example, the pancreas, thyroid, liver, and parathyroids are also endocrine glands that make hormones like insulin. 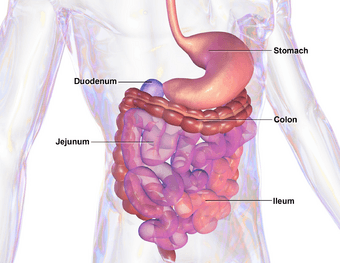 The structure and function can be described both as gross anatomy and as microscopic anatomy or histology. The tract itself is divided into upper and lower tracts, and the intestines small and large parts.

The upper gastrointestinal tract consists of the mouth, pharynx, esophagus, stomach, and duodenum. The exact demarcation between the upper and lower tracts is the suspensory muscle of the duodenum. This differentiates the embryonic borders between the foregut and midgut, and is also the division commonly used by clinicians to describe gastrointestinal bleeding as being of either "upper" or "lower" origin. Upon dissection, the duodenum may appear to be a unified organ, but it is divided into four segments based upon function, location, and internal anatomy. The four segments of the duodenum are as follows (starting at the stomach, and moving toward the jejunum): bulb, descending, horizontal, and ascending. The suspensory muscle attaches the superior border of the ascending duodenum to the diaphragm.

The suspensory muscle is an important anatomical landmark which shows the formal division between the duodenum and the jejunum, the first and second parts of the small intestine, respectively. This is a thin muscle which is derived from the embryonic mesoderm.

The small intestine begins at the duodenum and is a tubular structure, usually between 6 and 7 m long. Its mucosal area in an adult human is about 30 m2 (320 sq ft). The combination of the circular folds, the villi, and the microvilli increases the absorptive area of the mucosa about 600-fold, making a total area of about 250 square meters for the entire small intestine. Its main function is to absorb the products of digestion (including carbohydrates, proteins, lipids, and vitamins) into the bloodstream. There are three major divisions:

All content from Kiddle encyclopedia articles (including the article images and facts) can be freely used under Attribution-ShareAlike license, unless stated otherwise. Cite this article:
Gastrointestinal tract Facts for Kids. Kiddle Encyclopedia.