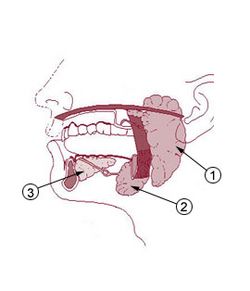 #1 is the Parotid gland; #2 is the Submandibular gland; #3 is the Sublingual gland.

The salivary glands make saliva. Saliva keeps the mouth and other parts of the digestive system wet and slippery. They also help break down the food when you are chewing. This helps food go down the throat to the stomach.

There are three main pairs of salivary glands. They are

There are also many small glands in the tongue, cheeks, lips and palate. All of those glands make mucous.

Mucous (slime) is a saccharide glycoprotein called mucin. With water it makes the slippery lubricant used in many parts of the body, where it lines the moving parts, surfaces and tubes. Here it lubricates the mouth, throat and alimentary canal.

The mucous also has antiseptic qualities: it contains lysozyme and immunoglobulins. Mucous, with its antiseptic molecules and slime, traps fungi, bacteria and viruses and prevent infections. The body produces about a litre of mucous per day, in the mouth and other places.

The serous fluid contains the enzyme amylase which acts in the digestion of carbohydrates. Minor salivary glands on the tongue secrete the amylase. The parotid gland produces purely serous saliva. The other major salivary glands produce mixed (serous and mucus) saliva.

Another type of serous fluid is secreted by the two layered serous membranes which line the body cavities. The serous fluid between the two layers acts as a lubricant and reduces friction from muscle movement.

The glands are inside a capsule, of connective tissue. Inside, it is made of little parts called lobules. Blood vessels and nerves go into the lobules. There are three main types of cells in the major salivary glands:

The small tubes go into ducts. Those ducts go into larger ducts that have little stripes on them, called striations. Those go into ducts between the lobes of the gland (called interlobar or excretory ducts). The main duct of the salivary glands then opens into the mouth.

Where the glands are

There are three salivary glands:

All content from Kiddle encyclopedia articles (including the article images and facts) can be freely used under Attribution-ShareAlike license, unless stated otherwise. Cite this article:
Salivary gland Facts for Kids. Kiddle Encyclopedia.