Bacteria (sing. bacterium) are very small organisms. Almost all bacteria are so tiny they can only be seen through a microscope.

They are amongst the simplest and the oldest organisms and they function as independent organisms.

Bacteria are made up of one cell, so they are a kind of unicellular organism. They are among the simplest single-celled organisms on Earth, and were one of the earliest forms of life. They include a number of extremophiles which live in extreme habitats.

There are probably more individual bacteria than any other sort of organism on the planet.

Most bacteria live in the ground or in water, but many live inside or on the skin of other organisms, including humans.

There are about the same number of bacterial cells in the human body as human cells.

Some bacteria can cause diseases, but others help us in everyday activities like digesting food (gut flora).

Some even work for us in factories, producing cheese and yogurt. 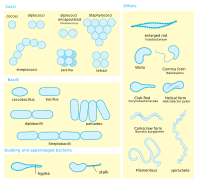 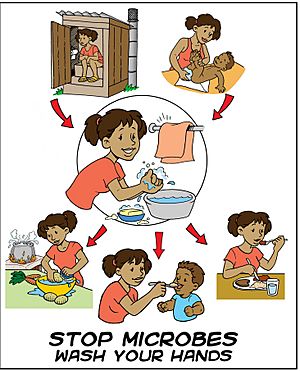 Pathogenic bacteria, the harmful kind, enter the human body from the air, water or food. Once inside, these bacteria attach themselves to or invade specific cells in our respiratory system, digestive tract or in any open wound. There they begin to reproduce and spread while using your body's food and nutrients to give them energy to help them reproduce and they can make us sick.

An example of pathogens that cause food poisoning are Salmonella, Campylobacter, E. coli and Listeria. This happens when these bacteria get into the food we eat, perhaps if it's too old or hasn't been kept in the fridge.

Some pathogens can be avoided by washing your hands regularly with soap and water so any germs you might have picked up touching things can be washed off.

If you fall and scrape your knee, cleaning the wound with antiseptic helps stop pathogens entering your body.

Some bacteria are extremophiles. These are bacteria that can live in very extreme conditions. For example some can live inside rocks up to 580 meters below the sea floor. According to one of the researchers, "You can find microbes everywhere — they're extremely adaptable to conditions, and survive wherever they are." 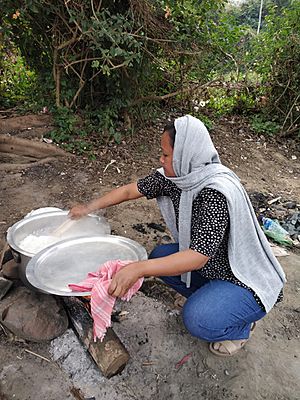