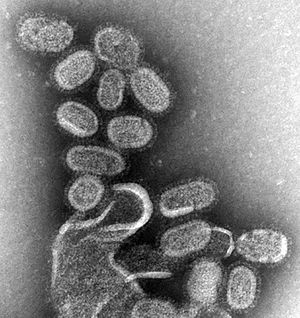 Influenza viruses are common pathogens. This image has a magnification of about 100.000 times

A pathogen is an infectious thing, such as a virus, bacteria, fungi or parasite, which causes a disease. This ability is called pathogenicity.

The body has many ways to defend against some of the common pathogens (such as Pneumocystis) in the form of the human immune system and by some "helpful" bacteria present in the human body's normal human flora. However, if the immune system or "good" bacteria is damaged in any way (for example, chemotherapy, HIV, or antibiotics being taken to kill other pathogens), pathogenic bacteria that were being held back can grow and cause harm to the host. Such cases are opportunistic infections.

Some pathogens cause epidemics. These include the bacterium Yersinia pestis which may have caused the Black Death, the Variola virus, and the malarial protozoa. They hurt or even kill large numbers of people.

The most famous and lethal outbreak was the 1918 Spanish flu pandemic (type A influenza, H1N1 subtype), which lasted from 1918 to 1919. It is not known exactly how many it killed, but estimates range from 20 to 100 million people. This pandemic has been described as "the greatest medical holocaust in history" and may have killed as many people as the Black Death.

The huge death toll was caused by an extremely high infection rate of up to 50% and the extreme severity of the symptoms. One observer wrote, "One of the most striking of the complications was hemorrhage from mucous membranes, especially from the nose, stomach, and intestine. Bleeding from the ears and skin also occurred". The majority of deaths were from bacterial pneumonia, a secondary infection caused by influenza, but the virus also killed people directly, causing massive bleeding and oedema in the lungs.

In plants, fungi are the main cause of infectious disease.

All content from Kiddle encyclopedia articles (including the article images and facts) can be freely used under Attribution-ShareAlike license, unless stated otherwise. Cite this article:
Pathogen Facts for Kids. Kiddle Encyclopedia.