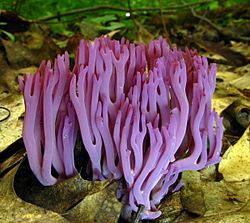 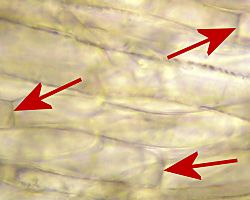 A fungus (plural: fungi) is a kind of living organism: yeasts, moulds and mushrooms that exist as a single filamentous or multicellular body. The filament is known as hyphae multinuclear with cell wall containing chitin or cellulose or both, others are parasitic saprophytic on other organisms and reproduce sexually and asexually.

The fungi are a separate kingdom of living things, different from animals and plants.

Fungi have cells with nuclei. Their cell walls contain chitin, unlike the cell walls of plants, which contain cellulose. These and other differences show that the fungi form a single group of related organisms, called the Eumycota or Eumycetes. They share a common ancestor and are a monophyletic group.

Their basic mode of life is saprophytic: a fungus breaks down dead organic matter around it, and uses it as food.p107

Despite the infobox on the right, the earliest fungi were probably in existence long before the Devonian period. One problem has been what to make of various traces in the Precambrian.

Fungi reproduce both sexually and asexually. Some fungi grow mushrooms: these are fruiting bodies. Under the cap there are gills; the gills bear spores that will disperse, and may develop into new fungi. Otherwise, fungi use a sporangium to bear asexual spores by mitosis, or sexual spores by meiosis. The spores are haploid.

Fungi may be single celled or multicellular. Yeast is single-celled, and reproduces either sexually or asexually. Asexual reproduction occurs by simple budding (binary fission). 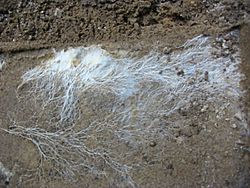 Mycelium of a fungus

The mycelium is the vegetative (non-reproductive) part of a fungus. It is usually underground (or inside some other substance), and made of filaments called hyphae.

Hyphae look like threads, or rootlets. The mat of hyphae may be very thickly woven. The fungus uses them to extract nutrients.

Hyphae are usually syncytia. This means the cell walls (septa) are mostly not complete, and the cell nuclei are not separated from each other as in normal cells. Details differ between species.

Symbiosis means living together. Lichens are a symbiosis between a fungus and an alga or bacterium. In this partnership the algal cells live inside the fungus tissue. The end result is a new mat-like life-form which clings to rock and other surfaces. About 20% of all fungi are lichenized.

Another important kind of symbiosis is mycorrhiza. This is when a fungus lives inside plant roots; most trees have mycorrhizal roots, and so do many crop plants. Both sides benefit in this arrangement. 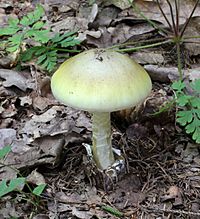 Some fungi cause crop diseases; others cause serious disease in humans. Some are highly poisonous: never eat a mushroom picked in the wild unless you know what you are doing.

All content from Kiddle encyclopedia articles (including the article images and facts) can be freely used under Attribution-ShareAlike license, unless stated otherwise. Cite this article:
Fungus Facts for Kids. Kiddle Encyclopedia.