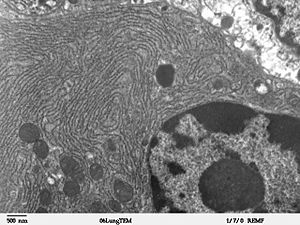 Electron micrograph of rough endoplasmic reticulum network around the nucleus (shown in lower right-hand side of the picture). Dark small circles in the network are mitochondria. 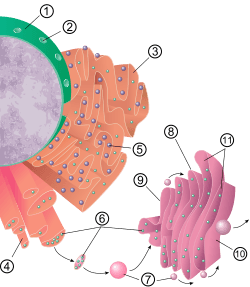 Similar to the ER is the sarcoplasmic reticulum (SR) found only in muscle cells. The SR stores and pumps calcium ions. The SR contains large stores of calcium, which it releases when the muscle cell is stimulated. Another type of cytoplasmic network is the plate-like Golgi apparatus.

The lacey membranes of the endoplasmic reticulum were first seen in 1945 by scientists using an electron microscope.

All content from Kiddle encyclopedia articles (including the article images and facts) can be freely used under Attribution-ShareAlike license, unless stated otherwise. Cite this article:
Endoplasmic reticulum Facts for Kids. Kiddle Encyclopedia.