Figure 1: Ribosomes assemble polymeric protein molecules whose sequence is controlled by the sequence of messenger RNA molecules. This is required by all living cells and associated viruses.

Ribosomes are important cell organelles. A ribosome is a large complex of RNA and protein. It does RNA translation, building proteins from amino acids using messenger RNA as a template. Ribosomes are found in all living cells, prokaryotes as well as eukaryotes.

The job of the ribosome is to make new proteins. It does this by moving along a strand of RNA and building a protein based on the code it reads. Making a protein this way is called translation. Ribosomes are usually found in the rough endoplasmic reticulum, but can also be found throughout the cytoplasm.

Translation of mRNA (1) by a ribosome (2)(shown as small and large subunits) into a polypeptide chain (3). The ribosome begins at the start codon of mRNA (AUG) and ends at the stop codon (UAG). 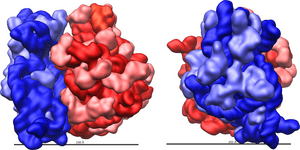 Ribosomes consist of two major subunits—the small ribosomal subunit reads the mRNA, while the large subunit joins amino acids to form a polypeptide chain. Each subunit is composed of one or more ribosomal RNA (rRNA) molecules and a variety of proteins.

All content from Kiddle encyclopedia articles (including the article images and facts) can be freely used under Attribution-ShareAlike license, unless stated otherwise. Cite this article:
Ribosome Facts for Kids. Kiddle Encyclopedia.