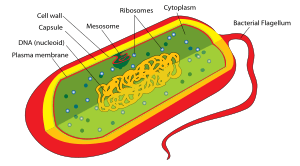 Prokaryotes (or monera) are one of the simplest living things. They are unicellular organisms and they include two major divisions of simple living beings: bacteria, and archaea. They generally do not have a cell nucleus, nuclear membrane or cell organelles, however a small number of exceptions have been found. They possess genetic material in the form of a single DNA loop known as Nucleoid. Bacteria include the Cyanobacteria (formerly known as blue-green algae due to their photosynthetic capacity).

Some form biofilms that are somewhat like multicellular organisms.

Besides a nucleus, prokaryotes lack other things eukaryotes (cells with a true nucleus) have. They reproduce without fusion of gametes. They do not have membranes inside the cell. This means that there are no vacuoles, Golgi apparatus, endoplasmic reticula or other organelles inside the cell. However, they do have ribosomes, though of a simpler kind than eukaryotes. Eukaryote cells include organelles which were once free-living prokaryotes.

The prokaryotes may not be a monophyletic, taxonomic group of common descent, but merely a group of similar organisms. The relationships between Archaea, Eubacteria and Eukaryota are assessed differently by different scientists. The three-domain system of Carl Woese treats them as one monophyletic group.