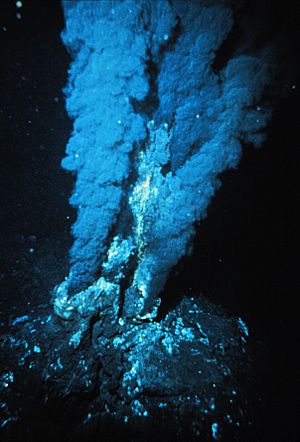 A black smoker in the Atlantic Ocean

A black smoker is a kind of hydrothermal vent that can be found on the ocean floor. It is a crack in the planet's surface from which geothermally heated water comes out. Hydrothermal vents are commonly found near volcanically active places, areas where tectonic plates are moving apart, ocean basins, and hotspots.

Hydrothermal vents are common on earth because it is both geologically active and has large amounts of water on its surface and within its crust. Common land types include hot springs, fumaroles and geysers. The most famous hydrothermal vent system on land is probably within Yellowstone National Park in the United States. Under the sea, hydrothermal vents may form features called "black smokers".

All content from Kiddle encyclopedia articles (including the article images and facts) can be freely used under Attribution-ShareAlike license, unless stated otherwise. Cite this article:
Black smoker Facts for Kids. Kiddle Encyclopedia.