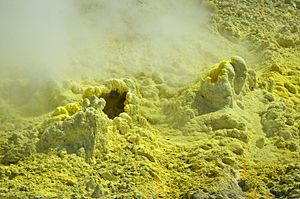 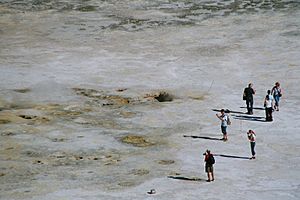 A fumarole (Latin fumus, smoke) is an opening in the crust of the Earth, often in the neighborhood of volcanoes, where steam and gases come out, for instance carbon dioxide, sulfur dioxide, hydrochloric acid, and hydrogen sulfide.

The name solfatara (from the Italian solfo, sulfur), is given to fumaroles with sulfurous gases.

Fumaroles may occur along tiny cracks or long fissures, in chaotic clusters or fields, and on the surfaces of lava flows and of thick deposits of pyroclastic flows. A fumarole field is an area of thermal springs and gas vents where magma or hot igneous rocks at shallow depth release gases or interact with groundwater.

Fumaroles may persist for decades or centuries if located above a persistent heat source; or they may disappear within weeks to months if they occur atop a fresh volcanic deposit that quickly cools. The Valley of Ten Thousand Smokes, for example, was formed during the 1912 eruption of Novarupta in Alaska. Initially, thousands of fumaroles occurred in the cooling ash from the eruption, but over time most of them have become extinct.

An estimated four thousand fumaroles exist within the boundaries of Yellowstone National Park in the United States. In April 2006 fumarole emissions killed three ski-patrol workers east of Chair 3 at Mammoth Mountain Ski Area in California. The workers were overpowered by toxic fumes (a mazuku) that had accumulated in a crevasse they had fallen into. Another example is an array of fumaroles in the Valley of Desolation in Morne Trois Pitons National Park in Dominica.

All content from Kiddle encyclopedia articles (including the article images and facts) can be freely used under Attribution-ShareAlike license, unless stated otherwise. Cite this article:
Fumarole Facts for Kids. Kiddle Encyclopedia.