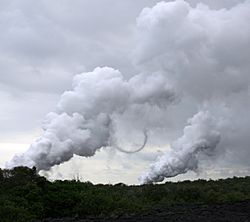 Steam condensing in the air 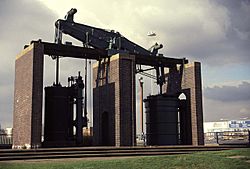 An 1817 Boulton & Watt beam engine, used in Netherton at the ironworks of M.W. Grazebrook. Re-erected on the A38(M) in Birmingham, England

Steam is the name given to water when it is a gas. Steam is a form of water vapour. Steam is sometimes seen as a string of cloudy translucent mist. But, that is only the result of the steam condensing in the air, which means the "steam" that you touch is not very hot. The actual hot steam is invisible.

When the pressure of the atmosphere is 1013 mbar (this is about the average pressure for a place which is at sea level), water will boil (turn into steam) at 100 degrees Celsius. This is the boiling point. Boiling happens in a boiler. 100 degrees Celsius is the same temperature as 212 degrees Fahrenheit, 80 degrees Réaumur and 373.15 Kelvin.

A major use of steam is to power steam engines. A steam engine is a heat engine that performs mechanical work using steam as its working fluid.

All content from Kiddle encyclopedia articles (including the article images and facts) can be freely used under Attribution-ShareAlike license, unless stated otherwise. Cite this article:
Steam Facts for Kids. Kiddle Encyclopedia.