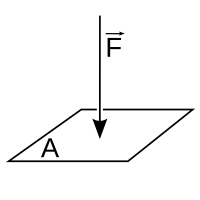 Pressure means how much force something is pushing on something else with. It is expressed as force acting per unit area:

(Pressure = Force divided by Area that force is acting on)

Pressure is also related to density. If a solid or a fluid is more dense, it has a larger weight, and therefore exerts a larger force, over the same area.

The standard unit of pressure is the Pascal (Pa) named after French physicist Blaise Pascal, who did much work on pressure. 1 pascal = a force of 1 newton per square meter.

All content from Kiddle encyclopedia articles (including the article images and facts) can be freely used under Attribution-ShareAlike license, unless stated otherwise. Cite this article:
Pressure Facts for Kids. Kiddle Encyclopedia.