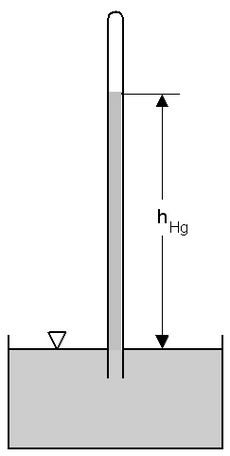 A barometer is an instrument used to measure air pressure. The barometer measures air pressure in various kinds of units including hectopascals (hPa). 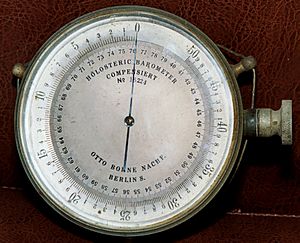 They are used for measuring altitude, or height above the ground, such as the height of a mountain, and they were often used to measure altitude aboard a hot air balloon. Barometers are also used in modern aviation. Miners sometimes use them to determine the depth of a mine. The most used purpose of the barometer was measuring air pressure. This helps meteorologists in predicting weather.

Although Evangelista Torricelli is universally credited with inventing the barometer in 1643, historical documentation also suggests Gasparo Berti, an Italian mathematician and astronomer, unintentionally built a water barometer sometime between 1640 and 1643. French scientist and philosopher René Descartes described the design of an experiment to determine atmospheric pressure as early as 1631, but there is no evidence that he built a working barometer at that time.

The concept that decreasing atmospheric pressure predicts stormy weather, postulated by Lucien Vidi, provides the theoretical basis for a weather prediction device called a "weather glass" or a "Goethe barometer" (named for Johann Wolfgang Von Goethe, the renowned German writer and polymath who developed a simple but effective weather ball barometer using the principles developed by Torricelli). The French name, le baromètre Liègeois, is used by some English speakers. This name reflects the origins of many early weather glasses - the glass blowers of Liège, Belgium.

Torricelli documented that the height of the mercury in a barometer changed slightly each day and concluded that this was due to the changing pressure in the atmosphere. He wrote: "We live submerged at the bottom of an ocean of elementary air, which is known by incontestable experiments to have weight".

Design changes to make the instrument more sensitive, simpler to read, and easier to transport resulted in variations such as the basin, siphon, wheel, cistern, Fortin, multiple folded, stereometric, and balance barometers. Fitzroy barometers combine the standard mercury barometer with a thermometer, as well as a guide of how to interpret pressure changes.

On June 5, 2007, a European Union directive was enacted to restrict the sale of mercury, thus effectively ending the production of new mercury barometers in Europe.

Using vacuum pump oil as the working fluid in a barometer has led to the creation of the new "World's Tallest Barometer" in February 2013. The barometer at Portland State University (PSU) uses doubly distilled vacuum pump oil and has a nominal height of about 12.4 m for the oil column height; expected excursions are in the range of ±0.4 m over the course of a year. Vacuum pump oil has very low vapor pressure and it is available in a range of densities; the lowest density vacuum oil was chosen for the PSU barometer to maximize the oil column height. 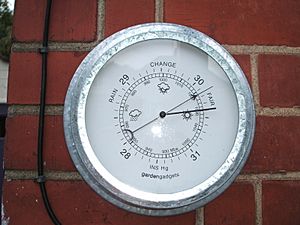 An aneroid barometer is an instrument for measuring pressure as a method that does not involve liquid. Invented in 1844 by French scientist Lucien Vidi, the aneroid barometer uses a small, flexible metal box called an aneroid cell (capsule), which is made from an alloy of beryllium and copper. The evacuated capsule (or usually several capsules, stacked to add up their movements) is prevented from collapsing by a strong spring. Small changes in external air pressure cause the cell to expand or contract. This expansion and contraction drives mechanical levers such that the tiny movements of the capsule are amplified and displayed on the face of the aneroid barometer. Many models include a manually set needle which is used to mark the current measurement so a change can be seen. In addition, the mechanism is made deliberately "stiff" so that tapping the barometer reveals whether the pressure is rising or falling as the pointer moves. This type of barometer is common in homes and in recreational boats, as well as small aircraft. It is also used in meteorology, mostly in barographs and as a pressure instrument in radiosondes.

A barograph records a graph of atmospheric pressure.

Microelectromechanical systems (or MEMS) barometers are extremely small devices between 1 and 100 micrometres in size (i.e. 0.001 to 0.1 mm). They are created via photolithography or photochemical machining. Typical applications include miniaturized weather stations, electronic barometers and altimeters.

There are many other more unusual types of barometer. From variations on the storm barometer, such as the Collins Patent Table Barometer, to more traditional-looking designs such as Hooke's Otheometer and the Ross Sympiesometer. Some, such as the Shark Oil barometer, work only in a certain temperature range, achieved in warmer climates.

The Galaxy Nexus has a built-in barometer

The Timex Expedition WS4 features a barometric chart which is used by the watch for short-term weather forecasting. A barometer can also be found in smartphones such as the Samsung Galaxy Nexus, Samsung Galaxy S3-S6, Motorola Xoom and Apple iPhone 6 smartphones, based on MEMS and piezoresistive pressure-sensing technologies. Inclusion of barometers on smartphones was originally intended to provide a faster GPS lock. However, third party researchers were unable to confirm additional GPS accuracy or lock speed due to barometric readings. The researchers suggest that the inclusion of barometers in smartphones may provide a solution to determining a user's elevation, but also suggest that several pitfalls must first be overcome. 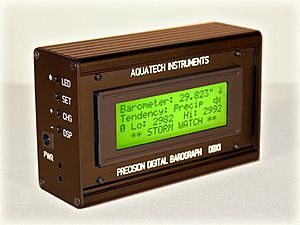 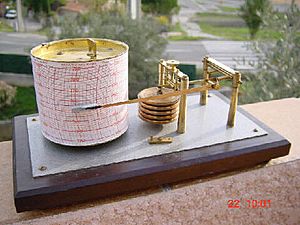 Barometric pressure and the pressure tendency (the change of pressure over time) have been used in weather forecasting since the late 19th century. When used in combination with wind observations, reasonably accurate short-term forecasts can be made. Simultaneous barometric readings from across a network of weather stations allow maps of air pressure to be produced, which were the first form of the modern weather map when created in the 19th century. Isobars, lines of equal pressure, when drawn on such a map, give a contour map showing areas of high and low pressure. Localized high atmospheric pressure acts as a barrier to approaching weather systems, diverting their course. Atmospheric lift caused by low-level wind convergence into the surface brings clouds and sometimes precipitation. The larger the change in pressure, especially if more than 3.5 hPa (0.1 inHg), the greater the change in weather that can be expected. If the pressure drop is rapid, a low pressure system is approaching, and there is a greater chance of rain. Rapid pressure rises, such as in the wake of a cold front, are associated with improving weather conditions, such as clearing skies.

With falling air pressure, gases trapped within the coal in deep mines can escape more freely. Thus low pressure increases the risk of firedamp accumulating. Collieries therefore keep track of the pressure. In the case of the Trimdon Grange colliery disaster of 1882 the mines inspector drew attention to the records and in the report stated "the conditions of atmosphere and temperature may be taken to have reached a dangerous point".

Aneroid barometers are used in scuba diving. A submersible pressure gauge is used to keep track of the contents of the diver's air tank. Another gauge is used to measure the hydrostatic pressure, usually expressed as a depth of sea water. Either or both gauges may be replaced with electronic variants or a dive computer.

The density of mercury will change with temperature, so a reading must be adjusted for the temperature of the instrument. For this purpose a mercury thermometer is usually mounted on the instrument. Temperature compensation of an aneroid barometer is accomplished by including a bi-metal element in the mechanical linkages. Aneroid barometers sold for domestic use typically have no compensation under the assumption that they will be used within a controlled room temperature range.

As the air pressure decreases at altitudes above sea level (and increases below sea level) the uncorrected reading of the barometer will depend on its location. The reading is then adjusted to an equivalent sea-level pressure for purposes of reporting. For example, if a barometer located at sea level and under fair weather conditions is moved to an altitude of 1,000 feet (305 m), about 1 inch of mercury (~35 hPa) must be added on to the reading. The barometer readings at the two locations should be the same if there are negligible changes in time, horizontal distance, and temperature. If this were not done, there would be a false indication of an approaching storm at the higher elevation.

Aneroid barometers have a mechanical adjustment that allows the equivalent sea level pressure to be read directly and without further adjustment if the instrument is not moved to a different altitude. Setting an aneroid barometer is similar to resetting an analog clock that is not at the correct time. Its dial is rotated so that the current atmospheric pressure from a known accurate and nearby barometer (such as the local weather station) is displayed. No calculation is needed, as the source barometer reading has already been converted to equivalent sea-level pressure, and this is transferred to the barometer being set—regardless of its altitude. Though somewhat rare, a few aneroid barometers intended for monitoring the weather are calibrated to manually adjust for altitude. In this case, knowing either the altitude or the current atmospheric pressure would be sufficient for future accurate readings.

All content from Kiddle encyclopedia articles (including the article images and facts) can be freely used under Attribution-ShareAlike license, unless stated otherwise. Cite this article:
Barometer Facts for Kids. Kiddle Encyclopedia.