Altitude means height above the ground or above the sea level. Common uses include aviation (flying, parachuting, gliding), and geography/surveying. In geometry it is also used as the height of the object itself. Generally, altitude is the distance one thing is above another thing. This is in the vertical or "up" direction. For the height of the ground (such as for hills and mountains), the word elevation is also used and might be a better choice. (Mountain climbers usually use the word altitude, especially when talking about how it affects the body). Buildings and other things on the ground usually just use the word height.

Vertical distance measurements in the "down" direction are commonly referred to as depth.

Altitude in aviation and in spaceflight 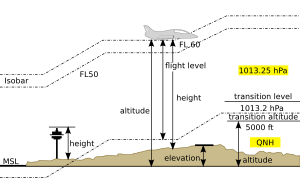 In aviation, the altitude can be measured and shown in several different ways. The height is either from the average sea level (also called Mean Sea Level or MSL), or from the ground (also called Above Ground Level, or AGL).

Airplanes can find their altitude by using air pressure. The air gets thinner the higher it is (and it has less pressure, because there's less air pushing down on it from above). This pressure can be measured and this can be converted into a height above sea level. The instrument for measuring altitude is the altimeter (from altitude and meter). The common pressure altimeter is a type of barometer with a dial showing distance (feet or metres) instead of atmospheric pressure.

There are several types of aviation altitude.

In simple terms, these types of altitude can be explained as ways of measuring the altitude:

The density of the air also affects how well an aircraft works. Density altitude is affected by barometric pressure, humidity and temperature. On a very hot day, density altitude at an airport (especially one at a high elevation) may be so high that aircraft can not take-off. This most often affects helicopters or an aircraft that is carrying a large amount of cargo.

Regions in the atmosphere

The Earth's atmosphere is divided into several regions, based on altitude. The regions have different temperatures and winds and what things are in it. The regions are:

Regions on the surface of the Earth or in its atmosphere that are high above mean sea level are said to be high altitude. High altitude is often said to begin at 2,400 metres (8,000 ft) above sea level.

At high altitude, atmospheric pressure is lower than that at sea level. This is because of two effects. These effects are gravity and the heat in the air. Gravity makes the air to be as close as possible to the ground. The amount of heat in the air makes the molecules move quickly and push against each other. This makes the air expand. So most of the air will be in the lower atmosphere, closer to sea level, and all the air pushing against each other is called air pressure. So air pressure is less the higher you go.

As the air expands from heat, it rises to where the air pressure is less. As it rises, it can expand and it begins to cool. Because of this, high altitude air is cold. This causes an alpine climate. This climate affects the ecology at high altitude.

Effects of high altitude on humans

The human body can deal with high altitude by breathing faster, having a higher heart rate, and changing the blood itself to have more red blood cells that can carry oxygen. This can take days or weeks to happen. This works for people who live in the high mountains, and mountain climbers. For climbers, this is called acclimatization. Pilots and other people who go quickly to high altitudes need to be in a space suit, pressure suit, or inside a pressurized airplane, so the air is still the same as at the ground. Above 8,000 metres (26,000 ft), the human body cannot make the needed changes and will eventually die. Several of the world's tallest mountains are this high, the climbers usually take oxygen tanks with them, and only stay for a few hours at the highest levels.

All content from Kiddle encyclopedia articles (including the article images and facts) can be freely used under Attribution-ShareAlike license, unless stated otherwise. Cite this article:
Altitude Facts for Kids. Kiddle Encyclopedia.