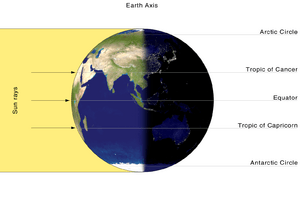 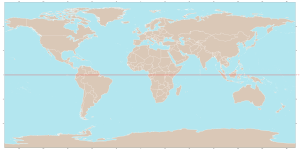 The equator is a line which is not real drawn around a sphere or planet, such as the Earth. It is one of the lines known as a line of latitude, or circle of latitude. The name "equator" is Latin language for "even-maker"; at equator the day and night are exactly the same length around the year.

The latitude of the Earth's equator is, by definition, 0° (zero degrees) of arc. The Equator is one of the five notable circles of latitude on Earth; the other four are the two Polar Circles (the Arctic Circle and the Antarctic Circle) and the two Tropical Circles (the Tropic of Cancer and the Tropic of Capricorn). The Equator is the only line of latitude which is also a great circle — that is, one whose plane passes through the center of the globe. The plane of Earth's equator, when projected outwards to the celestial sphere, defines the celestial equator.

In the cycle of Earth's seasons, the plane of the equator passes through the Sun twice per year: at the March and September equinoxes. To an observer on the Earth, the Sun appears to travel North or South over the Equator (or the celestial equator) at these times. Light rays from the center of the Sun are perpendicular to the surface of the Earth at the point of solar noon on the Equator. 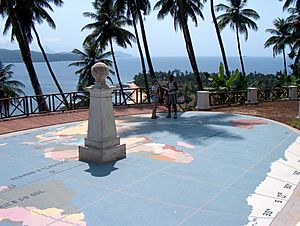 The Equator marked as it crosses Ilhéu das Rolas, in São Tomé and Príncipe 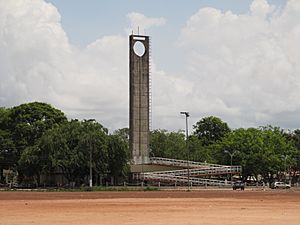 The Marco Zero monument marking the Equator in Macapá, Brazil.

Locations on the Equator experience the quickest sunrises and sunsets, because the sun moves nearly perpendicular to the horizon for most of the year. The length of daylight (sunrise to sunset) is almost constant throughout the year; it is about 14 minutes longer than nighttime due to atmospheric refraction and the fact that sunrise is begun (or sunset is ended) as the upper edge, not the centre, of the Sun's disk crosses the horizon.

Sites near the Equator, such as the Guiana Space Centre in Kourou, French Guiana, are good locations for spaceports as they have a faster rotational speed than other latitudes; the added velocity reduces the fuel needed to launch spacecraft. Because the Earth spins to the east, spacecraft must also launch to the east (or to the southeast or northeast) to take advantage of this Earth-boost of speed. 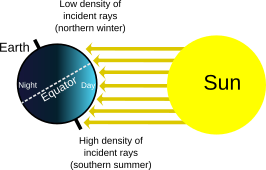 Diagram of the seasons, depicting the situation at the December solstice. Regardless of the time of day (i.e. the Earth's rotation on its axis), the North Pole will be dark, and the South Pole will be illuminated; see also arctic winter. In addition to the density of incident light, the dissipation of light in the atmosphere is greater when it falls at a shallow angle.

Seasons result from the yearly revolution of the Earth around the Sun and the tilt of the Earth's axis relative to the plane of revolution. During the year the northern and southern hemispheres are inclined toward or away from the sun according to Earth's position in its orbit. The hemisphere inclined toward the sun receives more sunlight and is in summer, while the other hemisphere receives less sun and is in winter (see solstice).

At the equinoxes, the Earth's axis is not tilted toward the sun, instead it is perpendicular to the sun meaning that the day is about 12 hours long, as is the night, across the whole of the Earth.

Near the Equator there is little temperature fluctuation throughout the year, though there may be dramatic differences in rainfall and humidity. The terms summer, autumn, winter and spring do not generally apply, and in many tropical regions people identify two seasons: the wet season and the dry season; although some areas remain wet or dry all year. Temperatures at sea level are usually high year-round, but some higher altitudes such as the Andes and Mount Kilimanjaro sustain glaciers.

The Equator traverses the land of 11 countries. Starting at the Prime Meridian and heading eastwards, the Equator passes through:

Despite its name, no part of Equatorial Guinea's territory lies on the Equator. However, its island of Annobón is 155 km (96 mi) south of the Equator, and the rest of the country lies to the north. 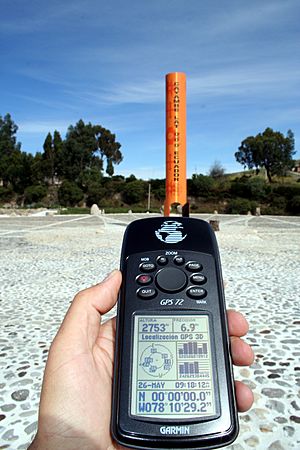 GPS reading taken on the Equator close to the Quitsato Sundial, at Mitad del Mundo, Ecuador.

All content from Kiddle encyclopedia articles (including the article images and facts) can be freely used under Attribution-ShareAlike license, unless stated otherwise. Cite this article:
Equator Facts for Kids. Kiddle Encyclopedia.