Location of the Prime Meridian 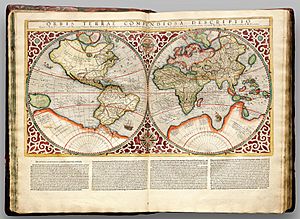 Gerardus Mercator in his Atlas Cosmographicae (1595) uses a prime meridian somewhere close to 25°W, passing just to the west of Santa Maria Island in the Atlantic. His 180th meridian runs along the Strait of Anián (Bering Strait)

A prime meridian is ultimately arbitrary, unlike an equator, which is determined by the axis of rotation—and various conventions have been used or advocated in different regions and throughout history. The most widely used modern meridian is the IERS Reference Meridian. It is derived but deviates slightly from the Greenwich Meridian, which was selected as an international standard in 1884.

All content from Kiddle encyclopedia articles (including the article images and facts) can be freely used under Attribution-ShareAlike license, unless stated otherwise. Cite this article:
Prime meridian Facts for Kids. Kiddle Encyclopedia.