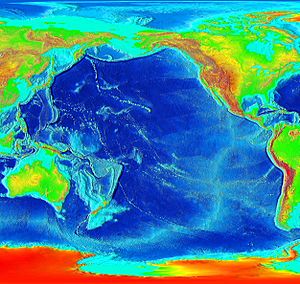 A map of the Pacific Ocean. It is ringed by many volcanoes and oceanic trenches.

The Pacific Ocean is the body of water between Asia and Australia in the west, the Americas in the east, the Southern Ocean to the south, and the Arctic Ocean to the north. It is the largest named ocean and it covers one-third of the surface of the entire world. It joins the Atlantic Ocean at a line drawn south from Cape Horn, Chile/Argentina to Antarctica, and joins the Indian Ocean at a line drawn south from Tasmania, Australia to Antarctica.

As the Atlantic slowly gets wider, the Pacific is slowly shrinking. It does this by folding the sea floor in towards the center of the Earth - this is called subduction. This bumping and grinding is hard so there are many earthquakes and volcanoes when the pressure builds up and is quickly released as large explosions of hot rocks and dust. When an earthquake happens under the sea, the quick jerk causes a tsunami. This is why tsunamis are more common around the edge of the Pacific than anywhere else. Many of the Earth's volcanoes are either islands in the Pacific, or are on continents within a few hundred kilometers of the ocean's edge. Plate tectonics are another reason which makes Pacific Ocean smaller. 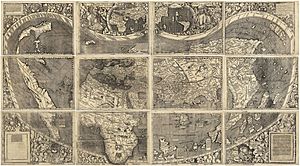 Universalis Cosmographia, the Waldseemüller map dated 1507, from a time when the nature of the Americas was ambiguous, particularly North America, as a possible part of Asia, was the first map to show the Americas separating two distinct oceans. South America was generally considered a "new world" and shows the name "America" for the first time, after Amerigo Vespucci

Made in 1529, the Diogo Ribeiro map was the first to show the Pacific at about its proper size 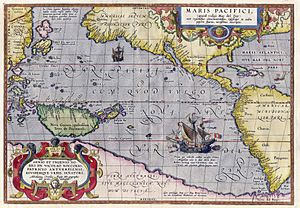 Maris Pacifici by Ortelius (1589). One of the first printed maps to show the Pacific Ocean

Important human migrations occurred in the Pacific in prehistoric times. About 3000 BC, the Austronesian peoples on the island of Taiwan mastered the art of long-distance canoe travel and spread themselves and their languages south to the Philippines, Indonesia, and maritime Southeast Asia; west towards Madagascar; southeast towards New Guinea and Melanesia (intermarrying with native Papuans); and east to the islands of Micronesia, Oceania and Polynesia.

Long-distance trade developed all along the coast from Mozambique to Japan. Trade, and therefore knowledge, extended to the Indonesian islands but apparently not Australia. In 219 BC Xu Fu sailed out into the Pacific searching for the elixir of immortality. By at least 878 when there was a significant Islamic settlement in Canton much of this trade was controlled by Arabs or Muslims. From 1404 to 1433 Zheng He led expeditions into the Indian Ocean. 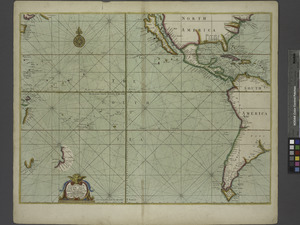 Map of the Pacific Ocean during European Exploration, circa 1702–1707. 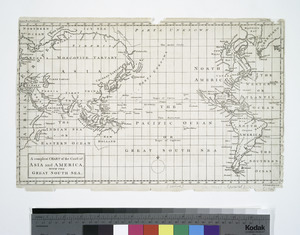 Map of the Pacific Ocean during European Exploration, circa 1754.

The first contact of European navigators with the western edge of the Pacific Ocean was made by the Portuguese expeditions of António de Abreu and Francisco Serrão, via the Lesser Sunda Islands, to the Maluku Islands, in 1512, and with Jorge Álvares's expedition to southern China in 1513, both ordered by Afonso de Albuquerque from Malacca.

The eastern side of the ocean was discovered by Spanish explorer Vasco Núñez de Balboa in 1513 after his expedition crossed the Isthmus of Panama and reached a new ocean. He named it Mar del Sur (literally, "Sea of the South" or "South Sea") because the ocean was to the south of the coast of the isthmus where he first observed the Pacific. 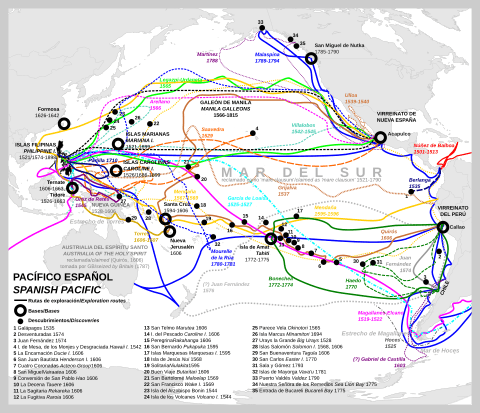 Map showing a large number of Spanish expeditions across the Pacific Ocean from the 16th to 18th centuries including the Manila galleon route between Acapulco and Manila, the first transpacific trade route in history.

In 1520, navigator Ferdinand Magellan and his crew were the first to cross the Pacific in recorded history. They were part of a Spanish expedition to the Spice Islands that would eventually result in the first world circumnavigation. Magellan called the ocean Pacífico (or "Pacific" meaning, "peaceful") because, after sailing through the stormy seas off Cape Horn, the expedition found calm waters. The ocean was often called the Sea of Magellan in his honor until the eighteenth century. Magellan stopped at one uninhabited Pacific island before stopping at Guam in March 1521. Although Magellan himself died in the Philippines in 1521, Spanish navigator Juan Sebastián Elcano led the remains of the expedition back to Spain across the Indian Ocean and round the Cape of Good Hope, completing the first world circumnavigation in 1522. Sailing around and east of the Moluccas, between 1525 and 1527, Portuguese expeditions discovered the Caroline Islands, the Aru Islands, and Papua New Guinea. In 1542–43 the Portuguese also reached Japan.

In 1564, five Spanish ships carrying 379 explorers crossed the ocean from Mexico led by Miguel López de Legazpi, and sailed to the Philippines and Mariana Islands. For the remainder of the 16th century, Spanish influence was paramount, with ships sailing from Mexico and Peru across the Pacific Ocean to the Philippines via Guam, and establishing the Spanish East Indies. The Manila galleons operated for two and a half centuries, linking Manila and Acapulco, in one of the longest trade routes in history. Spanish expeditions also discovered Tuvalu, the Marquesas, the Cook Islands, the Solomon Islands, and the Admiralty Islands in the South Pacific.

Later, in the quest for Terra Australis ("the [great] Southern Land"), Spanish explorations in the 17th century, such as the expedition led by the Portuguese navigator Pedro Fernandes de Queirós, discovered the Pitcairn and Vanuatu archipelagos, and sailed the Torres Strait between Australia and New Guinea, named after navigator Luís Vaz de Torres. Dutch explorers, sailing around southern Africa, also engaged in discovery and trade; Willem Janszoon, made the first completely documented European landing in Australia (1606), in Cape York Peninsula, and Abel Janszoon Tasman circumnavigated and landed on parts of the Australian continental coast and discovered Tasmania and New Zealand in 1642.

In the 16th and 17th centuries, Spain considered the Pacific Ocean a mare clausum—a sea closed to other naval powers. As the only known entrance from the Atlantic, the Strait of Magellan was at times patrolled by fleets sent to prevent entrance of non-Spanish ships. On the western side of the Pacific Ocean the Dutch threatened the Spanish Philippines.

The 18th century marked the beginning of major exploration by the Russians in Alaska and the Aleutian Islands, such as the First Kamchatka expedition and the Great Northern Expedition, led by the Danish Russian navy officer Vitus Bering. Spain also sent expeditions to the Pacific Northwest, reaching Vancouver Island in southern Canada, and Alaska. The French explored and settled Polynesia, and the British made three voyages with James Cook to the South Pacific and Australia, Hawaii, and the North American Pacific Northwest. In 1768, Pierre-Antoine Véron, a young astronomer accompanying Louis Antoine de Bougainville on his voyage of exploration, established the width of the Pacific with precision for the first time in history. One of the earliest voyages of scientific exploration was organized by Spain in the Malaspina Expedition of 1789–1794. It sailed vast areas of the Pacific, from Cape Horn to Alaska, Guam and the Philippines, New Zealand, Australia, and the South Pacific. 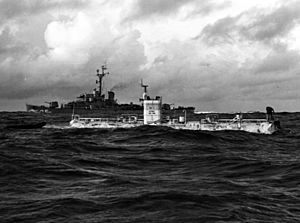 The bathyscaphe Trieste, before her record dive to the bottom of the Mariana Trench, 23 January 1960

Growing imperialism during the 19th century resulted in the occupation of much of Oceania by European powers, and later Japan and the United States. Significant contributions to oceanographic knowledge were made by the voyages of HMS Beagle in the 1830s, with Charles Darwin aboard; HMS Challenger during the 1870s; the USS Tuscarora (1873–76); and the German Gazelle (1874–76). 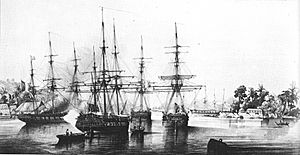 In Oceania, France obtained a leading position as imperial power after making Tahiti and New Caledonia protectorates in 1842 and 1853, respectively. After navy visits to Easter Island in 1875 and 1887, Chilean navy officer Policarpo Toro negotiated the incorporation of the island into Chile with native Rapanui in 1888. By occupying Easter Island, Chile joined the imperial nations. By 1900 nearly all Pacific islands were in control of Britain, France, United States, Germany, Japan, and Chile.

Although the United States gained control of Guam and the Philippines from Spain in 1898, Japan controlled most of the western Pacific by 1914 and occupied many other islands during the Pacific War; however, by the end of that war, Japan was defeated and the U.S. Pacific Fleet was the virtual master of the ocean. The Japanese-ruled Northern Mariana Islands came under the control of the United States. Since the end of World War II, many former colonies in the Pacific have become independent states. 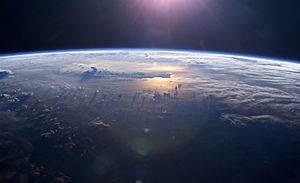 Sunset over the Pacific Ocean as seen from the International Space Station. Anvil tops of thunderclouds are also visible.

The Pacific separates Asia and Australia from the Americas. It may be further subdivided by the equator into northern (North Pacific) and southern (South Pacific) portions. It extends from the Antarctic region in the South to the Arctic in the north. The Pacific Ocean encompasses approximately one-third of the Earth's surface, having an area of 165,200,000 km2 (63,800,000 sq mi)— larger than Earth's entire landmass combined, 150,000,000 km2 (58,000,000 sq mi).

Due to the effects of plate tectonics, the Pacific Ocean is currently shrinking by roughly 2.5 cm (1 in) per year on three sides, roughly averaging 0.52 km2 (0.20 sq mi) a year. By contrast, the Atlantic Ocean is increasing in size.

Along the Pacific Ocean's irregular western margins lie many seas, the largest of which are the Celebes Sea, Coral Sea, East China Sea (East Sea), Philippine Sea, Sea of Japan, South China Sea (South Sea), Sulu Sea, Tasman Sea, and Yellow Sea (West Sea of Korea). The Indonesian Seaway (including the Strait of Malacca and Torres Strait) joins the Pacific and the Indian Ocean to the west, and Drake Passage and the Strait of Magellan link the Pacific with the Atlantic Ocean on the east. To the north, the Bering Strait connects the Pacific with the Arctic Ocean.

The Southern Pacific Ocean harbors the Southeast Indian Ridge crossing from south of Australia turning into the Pacific-Antarctic Ridge (north of the South Pole) and merges with another ridge (south of South America) to form the East Pacific Rise which also connects with another ridge (south of North America) which overlooks the Juan de Fuca Ridge.

For most of Magellan's voyage from the Strait of Magellan to the Philippines, the explorer indeed found the ocean peaceful; however, the Pacific is not always peaceful. Many tropical storms batter the islands of the Pacific. The lands around the Pacific Rim are full of volcanoes and often affected by earthquakes. Tsunamis, caused by underwater earthquakes, have devastated many islands and in some cases destroyed entire towns. 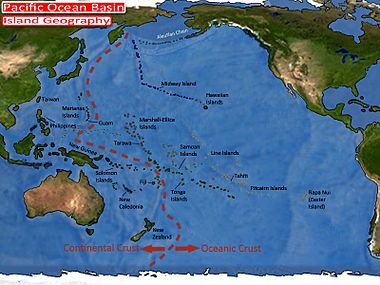 The island geography of the Pacific Ocean Basin 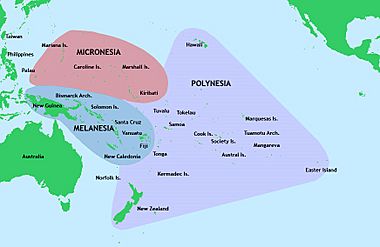 All content from Kiddle encyclopedia articles (including the article images and facts) can be freely used under Attribution-ShareAlike license, unless stated otherwise. Cite this article:
Pacific Ocean Facts for Kids. Kiddle Encyclopedia.