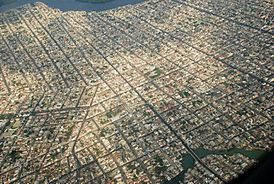 Guayaquil, officially Santiago de Guayaquil, is the largest city in Ecuador. It has about 3.5 million in the metropolitan area. It is also the nation's main port. The city is the capital of both the Guayas Province and the Guayaquil Canton.

All content from Kiddle encyclopedia articles (including the article images and facts) can be freely used under Attribution-ShareAlike license, unless stated otherwise. Cite this article:
Guayaquil Facts for Kids. Kiddle Encyclopedia.