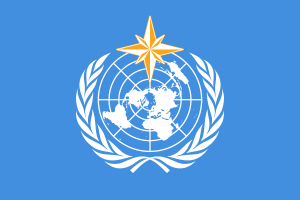 In 1950, the United Nations created the WMO for meteorology (weather and climate), operational hydrology and related geophysical sciences. Its headquarters are in Geneva, Switzerland. The current president is Alexander Bedritsky and the current Secretary-General is Michel Jarraudwho were both elected by the 14th World Meteorological Congress in 2003.

All content from Kiddle encyclopedia articles (including the article images and facts) can be freely used under Attribution-ShareAlike license, unless stated otherwise. Cite this article:
World Meteorological Organization Facts for Kids. Kiddle Encyclopedia.