The Intergovernmental Panel on Climate Change (IPCC) is a group of scientists chosen by governments and other large groups from around the world who study the way that humans are making the Earth heat up unnaturally. The group was established in 1988 by the World Meteorological Organization (WMO) and the United Nations Environment Programme (UNEP), two organizations of the United Nations.

The IPCC shared the 2007 Nobel Peace Prize with former Vice President of the United States Al Gore who won for working on the same problems.

A lot of IPCC work is publishing reports about the United Nations Framework Convention on Climate Change (UNFCCC), an international agreement that human inventions and chemistry may make the Earth too hot to live on. The UNFCCC was the beginning of the Kyoto Protocol. Members of the IPCC read, write, and calculate as much as they can. Only member states of the WMO and UNEP may be members of IPCC. A lot of professors trust the IPCC work.

The Fourth Assessment Report (AR4) was completed in early 2007. Like earlier IPCC reports, it contains four reports, three of them from its working groups.

The Third Assessment Report (TAR) contains four reports, three of them from its working groups:

The "headlines" from the Summary for Policymakers in The Scientific Basis were:

The estimate for the climate sensitivity was 1.5 to 4.5 °C; and the average temperature was predicted to increase by 1.4 to 5.8 Celsius degrees between 1990 and 2100, and the sea level was predicted to rise between 0.1 and 0.9 meters. The range of predictions is based on different levels of human carbon dioxide production. Each perdiction has different possible outcomes.

MIT professor Richard Lindzen, who works for the IPCC Working Group 1, claims some of the IPCC reports are wrong. He told the U.S. Senate Committee on Commerce, Science and Transportation that he was unhappy about the Executive Summary based on his work in May 2001. He said that he told the IPCC they were making mistakes and the Working Group 1 report said that meant they were "making improvements".

The summary does not reflect the full document... For example, I worked on Chapter 7, Physical Processes. This chapter dealt with the nature of the basic processes which determine the response of climate, and found numerous problems with model treatments – including those of clouds and water vapor. The chapter was summarized with the following sentence: 'Understanding of climate processes and their incorporation in climate models have improved, including water vapor, sea-ice dynamics, and ocean heat transport.'

Climate Change 1995, the IPCC Second Assessment Report (SAR), was finished in 1996. It was made in four parts:

Changing what the scientists say

Three scientists involved in climate research believe that the IPCC reports do not accurately summarize the state of knowledge.

On December 20, 1995, Reuters news agency claimed a British scientist Keith Shine, one of IPCC's most important authors, talking about the Policymakers' Summary, said: "We produce a draft, and then the policymakers go through it line by line and change the way it is presented.... It's peculiar that they have the final say in what goes into a scientists' report". Keith Shine did not say what differences the changes make.

Frederick Seitz, a physicist of Rockefeller University, said the IPCC report was not good, writing "I have never witnessed a more disturbing corruption of the peer-review process than the events that led to this IPCC report". He opposed it in the Leipzig Declaration of S. Fred Singer's Science and Environmental Policy Project.

Professor Seitzs comments were opposed by the presidents of the American Meteorological Society and University Corporation for Atmospheric Research, who wrote about an effort by some people make it seem that humans had not changed the climate. Special insert .

The Second Assessment Report was the only one with a chapter on the economic effect of climate change. This part of the report was thought to be unfair because the value of life in poorer countries was less.

The 1992 supplementary report was an update of the 1990 report, requested for the Framework Convention on Climate Change at the Earth Summit (United Nations Conference on Environment and Development) in Rio de Janeiro in 1992.

It did not make any important changes to the 1990 report. It claimed the prediction methods in the First Assessment Report, were now improved, but did not include aerosol or ozone changes.

The IPCC first assessment report was completed in 1990, and used to make the United Nations Framework Convention on Climate Change (UNFCCC).

The Chairperson of the IPCC is Rajendra K. Pachauri, elected in May 2002; before that Robert Watson headed the IPCC. The chairperson is helped by an elected Bureau including vice-chairpersons, Working Group co-chairpersons and a Secretariat (see below).

The IPCC Panel is made of people from governments and other groups. Scientific experts are preferred. Meetings of the IPCC and IPCC Working Groups are held by members of governments. Non-Governmental and Intergovernmenta Organizations may be allowed to attend as observers. Meetings of the IPCC Bureau, workshops, experts and lead authors are by invitation only. 350 government officials and climate change experts visited the 2003 meeting. The meeting report says there were 322 persons in attendance at meetings with about seven-eighths of visitors being from governments.

There are several major groups:

The IPCC receives funding from UNEP, WMO, and its own Trust Fund which gets money from governments.

People from over 130 countries contributed to the IPCC Fourth Assessment Report over 6 years. These people included more than 2500 scientific expert reviewers, more than 800 contributing authors, and more than 450 lead authors.

The Working Group 1 report of 2007 (including the summary for policy makers) included contributions by 600 authors from 40 countries, over 620 expert reviewers, a large number of government reviewers, and representatives from 113 governments.

The IPCC activities are controlled by the WMO Executive Council and UNEP Governing Council to support the UN Framework Convention on Climate Change.

In April 2006, the IPCC released the IPCC Fourth Assessment Report or AR4. Reports of the workshops held so far are available at the IPCC website.

The IPCC also supports other activities, such as the Data Distribution Centre Welcome to the IPCC Data Distribution Centre and the National Greenhouse Gas Inventories Programme IPCC - Task Force on National Greenhouse Gas Inventories. This involves estimating greenhouse gas based on the levels of fuel used, industrial production and so on.

The IPCC also answers questions from the UNFCCC Subsidiary Body for Scientific and Technological Advice (SBSTA).

Preparation of the reports

The IPCC reports are a collection of peer reviewed and published science. Each IPCC report explains improvements to the previous report and also explains where more research is needed.

Review comments are open to the public for at least five years.

The Panel controls what the IPCC agrees on to meet standards. The Panel's approval process has been criticized for changing what the experts put in the Reports.

Authors are chosen from a list of researchers prepared by governments, other important groups, the Working Group/Task Force Bureaux, and other experts ([12]PDF (55.7 KB), 4.2.1,2). The group of Coordinating Lead Authors and Lead Authors for a section or chapter of a Report is expected to have many different views and to have people from different parts of the world.

In December 2007, the IPCC was awarded The Nobel Peace Prize 2007 "for their efforts to build up and disseminate greater knowledge about man-made climate change, and to lay the foundations for the measures that are needed to counteract such change." The award is shared with Former U.S. Vice-President Al Gore for his work on climate change and the documentary An Inconvenient Truth.

In January 2005 Christopher Landsea resigned from work on the IPCC AR4, saying that it was "both being motivated by pre-conceived agendas and being scientifically unsound" because of Kevin Trenberth of the National Center for Atmospheric Research's idea that global warming was contributing to recent hurricane activity. Roger A. Pielke who published Landsea's letter writes: "How anyone can deny that political factors were everpresent in the negotiations isn't paying attention", but says that "Despite the pressures, on tropical cyclones they figured out a way to maintain consistency with the actual balance of opinion(s) in the community of relevant experts." He continues "So there might be a human contribution (and presumably this is just to the observed upwards trends observed in some basins, and not to downward trends observed in others, but this is unclear) but the human contribution itself has not been quantitatively assessed, yet the experts, using their judgment, expect it to be there. In plain English this is what is called a 'hypothesis' and not a 'conclusion.' And it is a fair representation of the issue." 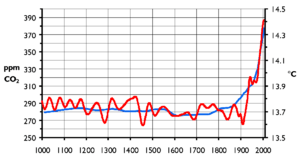 The IPCC Third Assessment Report showed a graph labeled "Millennial Northern Hemisphere temperature reconstruction" from a paper by Mann, Bradley and Hughes (MBH98) often called the "Hockey Stick Graph". This graph was different to the IPCC First assessment report which showed global temperature for the past 1000 years, and higher temperatures during the Medieval Warm Period. The graph was thought to show that temperatures between 1000 and 1900 were very different. This was criticized in an article by Stephen McIntyre and Ross McKitrick. In a 2006 letter to Nature, Bradley, Hughes and Mann claimed the original article had said that they could not be exact.

Some critics say the IPCC reports underestimate dangers, understate risks, and report only the lowest risks.

On February 1, 2007, the night before publication of IPCCs report on climate, a study was published saying that temperatures and sea levels have been rising at or above the speed the IPCC reported in 2001. The study compared IPCC 2001 predictions of temperature and sea level change with what actually happened. Over the six years, the actual temperature rise was near the top end of the range given by IPCC's 2001 prediction and the actual rise was more than the top of the range the IPCC predicted.

An example of scientific research which has indicated that predictions by the IPCC have uderstated risks is a study on rises in sea levels.

Political influence on the IPCC has been shown by the release of a memo by ExxonMobil to the Bush administration, and its effects on the IPCCs leadership. The Bush administration, at the request of ExxonMobil, wanted rid of Robert Watson, a climate scientist and IPCC chairperson, and to have him replaced by Pachauri, who was seen at the time as more friendly to industry.

In 2005, the UK House of Lords Select Committee on Economic Affairs produced a report on the economics of climate change. It commented on the IPCC process:

"We have some concerns about the objectivity of the IPCC process, with some of its emissions scenarios and summary documentation apparently influenced by political considerations. There are significant doubts about some aspects of the IPCCs emissions scenario exercise, in particular, the high emissions scenarios. The Government should press the IPCC to change their approach. There are some positive aspects to global warming and these appear to have been played down in the IPCC reports; the Government should press the IPCC to reflect in a more balanced way the costs and benefits of climate change. The Government should press the IPCC for better estimates of the monetary costs of global warming damage and for explicit monetary comparisons between the costs of measures to control warming and their benefits. Since warming will continue, regardless of action now, due to the lengthy time lags.

All content from Kiddle encyclopedia articles (including the article images and facts) can be freely used under Attribution-ShareAlike license, unless stated otherwise. Cite this article:
Intergovernmental Panel on Climate Change Facts for Kids. Kiddle Encyclopedia.