The Guardian facts for kids 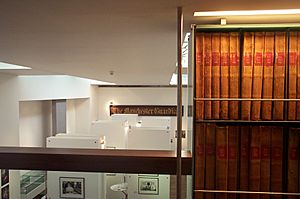 The newspaper was founded in 1821. It was founded by textile traders and merchants. The Guardian was seen as "an organ of the middle class", or, in the words of C.P. Scott's son Ted, "a paper that will remain bourgeois to the last". In 2005, Sir Max Hastings stated that he writes for The Guardian "because it is read by the new establishment", reflecting the paper's growing influence.

Until 1959 The Guardian was called The Manchester Guardian.

Three of the four people who wrote leaders for the Guardian joined the Social Democratic Party on its foundation in 1982. The paper supported Tony Blair when he wanted to lead the Labour Party and to become Prime Minister.

In 1999 theguardian.com started. At the time it was a website called Guardian Unlimited.

The Guardian describes itself as centre-left.

All content from Kiddle encyclopedia articles (including the article images and facts) can be freely used under Attribution-ShareAlike license, unless stated otherwise. Cite this article:
The Guardian Facts for Kids. Kiddle Encyclopedia.