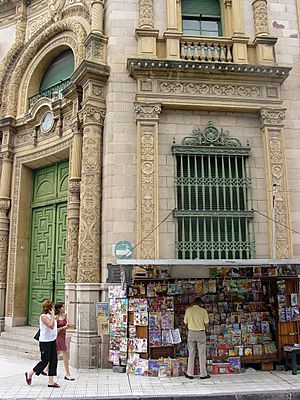 A place for buying newspapers

A newspaper is a publication printed on paper and issued regularly, usually once a day or once a week. It gives information and opinions about current events and news. Usually people like to read them to stay informed about their local city, state or country. Newspapers can be delivered to one's home, by subscription. One also can buy a newspaper at a store or at a newsstand. Recycling of paper is common. It may be converted to new paper, for example.

Newspapers usually have many topics. They usually include political events, crime, business, sports, and weather news. Newspapers use photographs to illustrate stories; and also often include comics and other entertainment, such as crosswords and horoscopes. Many have opinion sections. These sections print the opinions of people who work for the newspaper. The opinions, which are usually on stories in the news, are called editorials. Opinion sections usually also print short letters from people who read the newspaper.

All content from Kiddle encyclopedia articles (including the article images and facts) can be freely used under Attribution-ShareAlike license, unless stated otherwise. Cite this article:
Newspaper Facts for Kids. Kiddle Encyclopedia.