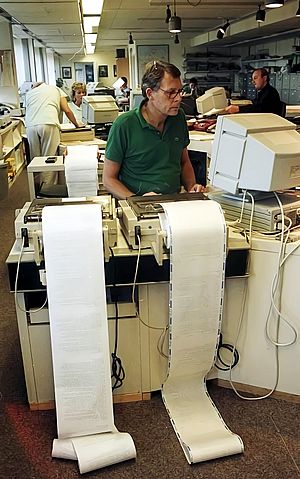 A news agency is a kind of company. It supplies information to newspapers, radio and television.

Although there are many news agencies around the world, three global news agencies, Agence France-Presse (AFP), Associated Press (AP) and Reuters, have offices in most countries of the world and cover all areas of information. All three began with and continue to operate on a basic philosophy of providing a single objective news feed to all subscribers; they do not provide separate feeds for conservative or liberal newspapers.

In the United Kingdom, Australia and some other countries a news agency or newsagent is also a shop which sells newspapers, magazines and stationary.

All content from Kiddle encyclopedia articles (including the article images and facts) can be freely used under Attribution-ShareAlike license, unless stated otherwise. Cite this article:
News agency Facts for Kids. Kiddle Encyclopedia.