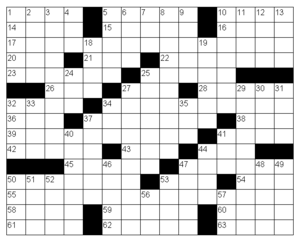 A crossword, or crossword puzzle, is a popular type of puzzle that uses words. They are usually found in newspapers, magazines, and in books which contain a collection of them. They can also be played over the Internet and using mobile apps.

The first crossword puzzle was created by Arthur Wynne, a journalist from Liverpool. It first appeared in the December 21, 1913 issue of the New York World. Today, there are many newspapers and magazines that are known for their crossword puzzles, such as the New York Times. A different crossword is typically printed every day or in every issue, and the answer (or solution) is either found somewhere else or often is not seen until the next day or issue.

A traditional crossword is made up of black and white squares, called a grid. All the white squares appear in horizontal rows or vertical columns, but are not always separated with black squares. Another way to say this is that every white square must have at least one other white square touching it on any side. The kind of crossword that appears in newspapers and magazines, such as the one in the image, often has lots of white squares beside each other.

The goal of solving the puzzle is to write different words, letter-by-letter, in the white squares. Next to the grid is a list of clues. The answer to each clue is a word or sometimes a phrase. The place in the grid where the answer to each clue should go is shown by a number and the direction in which the answer appears, for example, "1 Across" or "15 Down". Many computer programs have been created to find the answers to these clues.

Here is a small example of a (British-style) straight crossword:

The solution (answer) to this crossword is:

All content from Kiddle encyclopedia articles (including the article images and facts) can be freely used under Attribution-ShareAlike license, unless stated otherwise. Cite this article:
Crossword Facts for Kids. Kiddle Encyclopedia.